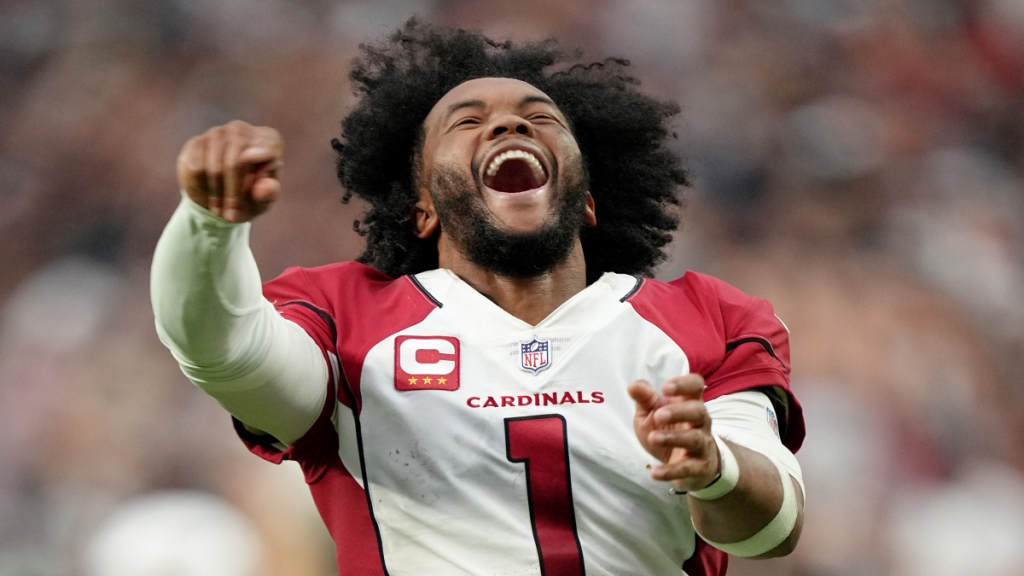 The Arizona Cardinals beat the Las Vegas Raiders (in Vegas) in a Week 2 thriller. Arizona quarterback Kyler Murray pulled off one of the most incredible 2-point conversions in NFL history, scrambling 85 yards (!!) to get the 2 points and send the game to overtime.

Kyler Murray and the Cardinals go the ball first in overtime and ran 10 plays but turned the ball over on downs after failing to convert a 4th & 1 from the Las Vegas 37-yard line. Then things got wild.

Las Vegas only ran 5 plays before Hunter Renfrow fumbled the ball. It was recovered by Arizona cornerback Byron Murphy who ran it back 59 yards for the touchdown and walk-off win in Las Vegas.

Afterward, as the Cardinals players were celebrating QB Kyler Murray approached some Cards fans in the stands when someone wearing a grey shirt slapped him in the fact. Murray looked ready to throw hands after the quick altercation that was caught on camera in two clips.

There’s now a new clip that has been posted showing a new angle of the fan’s alleged slap on Kyler Murray.

That new clip doesn’t show us a TON. I feel like we could glean more from the original clips than we could from that one. But with the ongoing police investigation (more on that below) it will likely become evidence at some point.

This first clip is choppy, it’s not your phone or computer. It appears they tried to slow down the footage so we can clearly see the fan striking Kyler Murray in the face:

@Raiders @NFL this is absolutely disgusting. Dude in the grey shirt needs to be banned from stadiums for life. Hits Kyler murray in the face on purpose and then tries to hide as you can see in this video….DISGUSTING. BAN HIM FOR LIFE. EVERYONE Retweet this out so it gets seen‼️ pic.twitter.com/FhI8xQoNwS

And here is a longer clip. This is at full speed and the altercation between Kyler Murray and the fan is quick but it’s obvious Kyler was heated afterward:

This tweet from Bleacher Report claims the Las Vegas PD are now investigating the incident. There are some pretty clear images floating around of the fan’s face that I chose not to include here so it shouldn’t be too difficult to connect the dots…

Las Vegas police are investigating an allegation that a fan struck Kyler Murray in the face following the Cardinals’ OT victory vs. the Raiders pic.twitter.com/vMKu4Q9MJb

It’s not clear if the grey shirt the fan is wearing is a Las Vegas Raiders shirt. Primarily because all of the other grey shirts in that section have ‘Raiders’ on the shirt. Andrew Joseph of For The Win says he reached out to the Raiders for a comment on the altercation but hasn’t heard back yet.

Twitter isn’t always the best place to find fair and balanced analysis, but it’s a good source to take the pulse of how people are feeling about any given encounter.

@Raiders @NFL this is disgusting. Please ban that Guy

It is interesting how quickly the city of Las Vegas embraced the Raiders and there hasn’t been any hangover like the Chargers in Los Angeles. The Raiders fans at these games *are* actual fans, not just out-of-towners who wanted to catch an NFL game while in Sin City for the weekend:

The choppy video really has thrown everyone off in the comments:

Was this recorded with a dial up connector?

The vast majority of the replies are just tagging the Las Vegas Raidrs. NFL fans, primarily Cardinals fans, want the Raiders to issue an apology to Kyler Murray and at last do something…

This tweet says 57-yards but Next Gen Stats found it to be 85 yards. Here’s Kyler Murray scrambling for the 2-point conversion, in case you missed it:

Kyler Murray has the first 2 minute, 57-yard run for a two-point conversion in NFL history pic.twitter.com/usk6ANGuoz