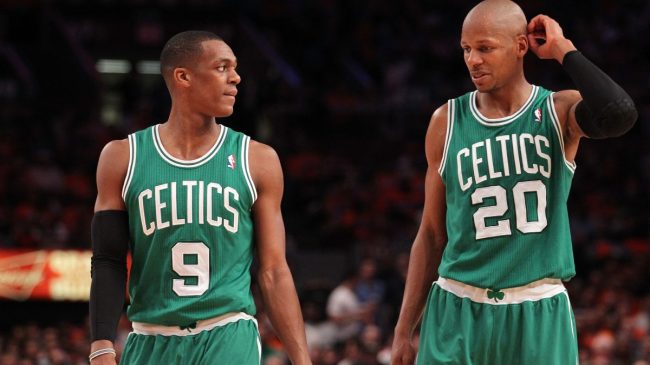 Kendrick Perkins let out a bit of tea while making an appearance on the Old Man and The Three podcast with JJ Redick and Tommy Alter.

The former NBA big man said that while he was playing for the Boston Celtics, the team once made Ray Allen and Rajon Rondo box it out over a beef between the two teammates. The disagreement, according to Perkins, stemmed from Allen’s displeasure with Rondo in the lineup.

Allen was apparently pushing for Rondo to be traded. He tried to sway the front office to go after Chris Paul instead. Word eventually got back to Rondo, which caused tensions to grow.

Perkins said that it was the beginning of the end. Take a listen.

"We made Ray and Rondo actually box it out. They had so much beef." —@KendrickPerkins on the tension between Ray Allen and Rajon Rondo

“When things started to go south, in my opinion, the first incident was when Ray was pushing so hard to trade Rondo for CP3 And it got back to Rondo. I think right there, we started having a little friction.

We made Ray and Rondo actually box it out. They had so much beef. We got to the practice facility, we bought the boxing gloves, and they actually had to box it out because we just really didn’t want to have the tension anymore.”

That trade didn’t happen. In fact, it was Ray Allen who would wind up leaving Boston, joining forces with LeBron James and the Miami Heat.

Though Allen and Rondo beefed back then, Perkins has said the teammates on that Celtics team have all gotten back on good terms.

“I’m glad we got it back together now. Ray, you saw him at the Boston game. He went and supported KG. Everybody’s back on talking terms.”

Still, what a wild story from Perk.