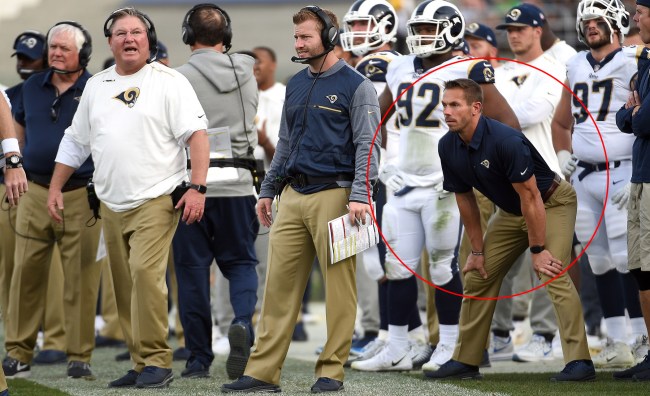 There are a lot of unusual jobs in the world of sports. The kind of jobs that no one ever really sees. And sometimes these employees do things that you wouldn’t ever consider them doing when you think of their job titles.

For instance, Los Angeles Rams’ Director of Strength Training and Performance (a fancy way of saying Strength and Conditioning Coach) Ted Rath has a VERY unusual task he has to perform on gamedays.

He has to follow his very excitable head coach Sean McVay around on the sidelines and make sure McVay doesn’t wander into the path of any referees on the Rams’ sideline.

“Coaches, whether it’s a position coach or even Sean McVay now, I literally have to spend most of my time when the offense is on the field standing right behind Sean and ripping him out of the way when the official’s about to run into him just so we don’t get a penalty,” Rath told NFL Films. “There is an art to it. It is king of like a dance. Maybe tango? Like a side step into the path of the official and then remove back.”

Rath isn’t kidding either. He’s even getting his own special on FS1 this coming Tuesday at 6pm ET called Get Back Coach.

As the game plays on, Sean McVay and his "Get Back Coach" tango on the sideline.
Expect more of this at #SBLIII 😂@RamsNFL #NFLFilmsPresents: Get Back Coach airs this Tuesday at 6pm ET on @FS1! pic.twitter.com/5FMyWH4gzT

Of course, now people think Rath will be like every other Rams assistant and get head coaching offers from other NFL teams.

Ted Rath is gonna be the head coach of the Cardinals by 2022 https://t.co/DOQ0LF6md7

Literally touches Sean McVay? Ted Rath is about to get a head coaching job. https://t.co/goGSaVT4Ll

How long before Sean McVay's "get back coach" Ted Rath gets an interview for a head coach job??pic.twitter.com/EWPF2fqGQM