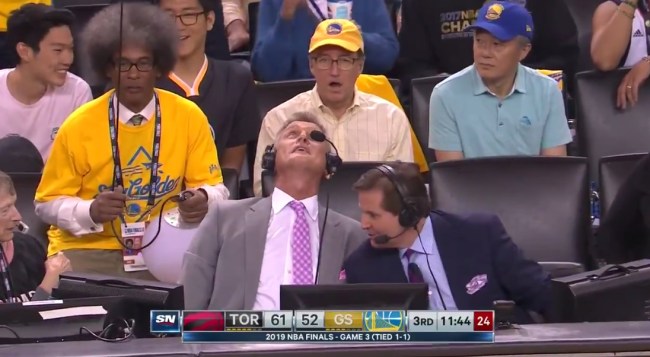 The Golden State Warriors took another L in the NBA Finals, falling 123-109 to the Toronto Raptors Wednesday night, but were it not for a bit of random luck that could have been the least of their worries.

That’s because while Steph Curry was going off for a playoff career-high 47 points in a losing effort, longtime Raptors TV analyst Leo Rautins nearly had his dome caved in by a light the fell from the ceiling of Oracle Arena while calling the game for Sportsnet.

“I’m trying to stay alive right here. I’m not kidding you folks. I’m sitting here at courtside, there’s this light from the ceiling that came down and landed right here,” Rautins told the TV audience. “If I leaned over this way, I’d be over. Done.”

Oracle Arena was opened in 1966 and is the oldest in the NBA, so we can just add this incident to the numerous reasons why the Warriors will be moving to the brand new Chase Center in San Francisco for the 2019-2020 season.

The Golden State #Warriors announced their culinary plans for the plaza being built around the new billion-dollar Chase Center in San Francisco. And it's certain to be a total Bay Area experience, boasting some of the area's most famous chefs. https://t.co/bKpgD8pgHf pic.twitter.com/yOO5aWbyxb

The Chase Center, future home of the @warriors in #Oakland, is going to be a shopping and restaurant destination! Many outstanding eateries and shops will open alongside the arena in the fall: https://t.co/aOjxGvklt2 pic.twitter.com/K3pQbDGhXY

The Warriors might want to rethink this rendering of a Drake-friendly Chase Center https://t.co/SKLLNsaJCs pic.twitter.com/DlUgCcdP4d

Here's an exclusive look at the practice court and a portion of the weight room and training room. pic.twitter.com/1ZpVttajxe

Meanwhile, in more basketball-related NBA Finals news, Warriors owner Joe Lacob claims he is as “serious as a heart attack” when he says Kevin Durant WILL return to play at some point.

Warriors owner Joe Lacob says he expects to see KD on the floor at some point during the #NBAFinals. pic.twitter.com/S5fcgjuYIo

Just keep your wife away from Beyonce, okay, Joe?