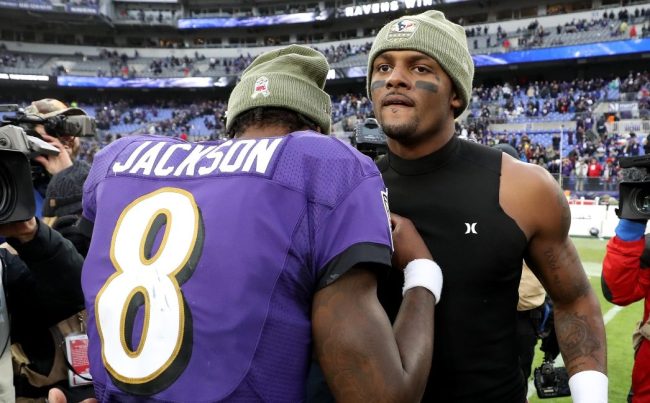 It feels like the Baltimore Ravens have been trying to sign Lamar Jackson to an extension for 100 years. Considering he’s the face of the franchise, the front office will likely get a deal done eventually. However, Jackson has been patient about signing a new deal with his team. Now, it sounds like the deal Deshaun Watson signed with the Cleveland Browns is playing a role in the negotiations between Jackson and Baltimore.

According to Mina Kimes, the clock is ticking on the Ravens to extend Lamar Jackson. The entire offense is built around him and it’s hard to imagine another quarterback succeeding in their system. Now is the time to get a deal finalized or else Baltimore could outprice themselves from re-signing him in a year or two.

"If another quarterback were to come in here, they would not be a contender." —@minakimes pic.twitter.com/tLUq85rGEr

The Ravens might have been able to extend Jackson sooner, however, it seems there is an outside factor playing a part in negotiations, per Adam Schefter. The Browns gave Deshaun Watson $230 million guaranteed. Due to Lamar Jackson’s ability and importance to Baltimore, it sounds like he’s seeking a deal similar to Watson’s.

At the end of the day, Jackson should be seeking a deal like this. Especially considering he doesn’t have any sexual assault allegations against him. Look for the Ravens to possibly ramp up extension talks with their star quarterback. If they allow these talks to go into the next offseason, the front office could be put in a rough spot financially.