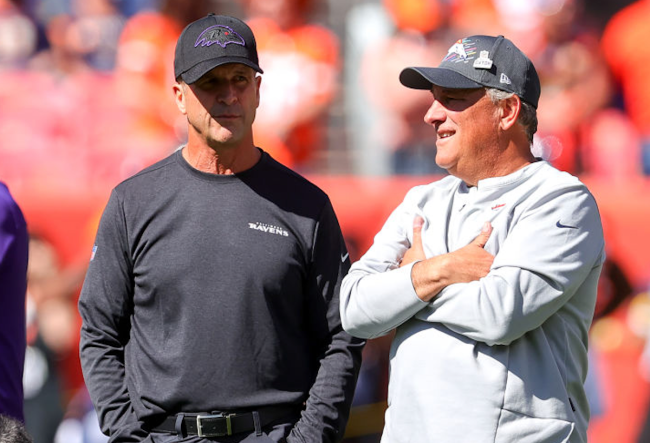 During the final seconds of a 23-7 victory Sunday at Empower Field at Mile High with the record just 3 yards away, John Harbaugh called a designed QB run for Lamar Jackson, who picked up 5 yards rather than drop to a knee as would be typical with the game all but over.

Broncos head coach Vic Fangio was not happy about the choice, and Harbaugh shot back by acknowledging Fangio’s offense taking stabs at the end zone with 10 seconds left and the game out of reach: “I don’t know that there’s a 16-point touchdown.”

WATCH: The Broncos sideline was enraged as the Ravens decided to run the ball on the final play of the game rather than take a knee. #9sports #BroncosCountry pic.twitter.com/QshWgAbkpX

The Broncos must’ve been extra salty about the run seeing as the entire game, they were stacking the box to prevent becoming a statistic: “Obviously, that was a very important goal for those guys, to keep us under 100 yards apparently,” Harbaugh said after the game.

In the wake of the decision, there was a fervent debate online which coach is being more petty: Vic, who called the tactic “bullshit,” or John, who allegedly put erroneous records over sportsmanship and player safety.

The Case For John:

What’s understood doesn’t have to be explained. Nearly every team in NFL history has taken a knee up 2 scores with 3 seconds on the clock. But the Baltimore Ravens DO NOT CARE about your feelings. They wanted the rushing record and they went and got it. Don’t like it? Stop them.

Game was over & Denver kept fighting. Which is fair. But once we got the int, it's fair we fight to get the record. https://t.co/MmGSMynLnk

Harbaugh running for 5 yards at the end of the game https://t.co/pKTRcj9lAg

Down by 16 late in the 4th, with 0:28 left, Fangio took 3 timeouts trying to score a meaningless TD. Spare me pic.twitter.com/N8xNj2DeNt

“Why would you run a play like that for a pointless record harbaugh?”

1) I’ll never understand why *professionals* whine when opponents don’t go easy on them.

3) Ravens have every right to use every second to try to break a 44-year record.

I need to know if Vic has ever coached his defense to go after the snap on kneel downs or not.. https://t.co/WAZjCpPoQi

John Harbaugh deserves to be in the Hall of Fame for this alone https://t.co/MnDTpQv34G

I've got to disagree with coach on this one. They needed like 3 yds for a record/streak.

As a coach you do that for your players. I don't have any problem with Harbaugh going for it as long as no one gets hurt. https://t.co/7rLLYjzp9I

The Case For Vic:

I can’t imagine what Harbaugh would say in a presser if a team did that to him.

The Ravens unnecessarily put 22 players at additional risk in a blowout to tie a record.

However, if you're the Broncos and upset about it, well should've played better.

Ravens not kneeling a victory to try for a record is weak.

Well you’re not a coach in the NFL. Usually there’s a certain amount of class and respect for the other team and their coaches especially those who worked together in the past. It was bush league but I always thought Harbaugh was an asshole anyway.

If you’re the Ravens, don’t you feel kinda cheap getting the record that way?

Where do you stand? Yes, I def would’ve went for the record too.