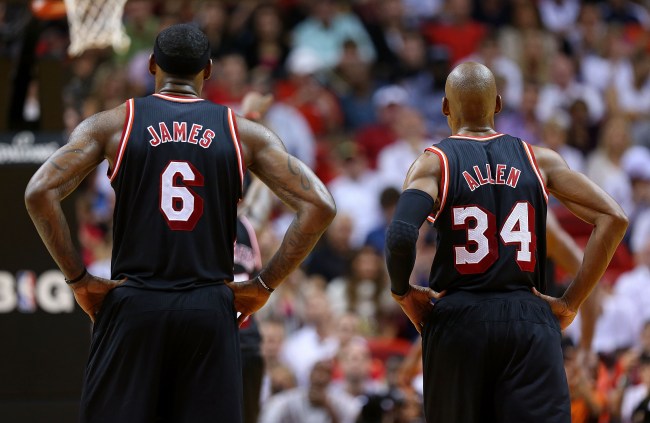 NBA shooting legend Ray Allen will be awarded a professional basketball player’s highest distinction on Friday when he will be inducted into the Hall of Fame in Springfield, Massachusetts.

Allen played 18 seasons in the league for the Bucks, SuperSonics, Celtics and Heat–playing alongside greats like Kevin Garnett, Paul Pierce, Glenn Robinson, and LeBron James. His rolodex of teammates is extensive, but the two-time NBA champion has two clear-cut winners on his favorite teammates of all-time.

In an interview with The Athletic, the 43-year-old Allen said:

“Toss-up between Sam Cassell and LeBron James. Sam was a guy you wanted to go to battle with. He wouldn’t quit on you and do whatever he could. He never wore bad body language. LeBron is a guy who you’ll have fun with, he’ll compete with you, but he is always one of the guys. He never made himself bigger than the next man.”

If you were expecting Allen to choose a teammate from his stacked 2008 Celtics team when the C’s beat Kobe and the Lakers for their first title in over two decades, you are sorely mistaken. After Allen defected to join Miami in 2012, his relationship with Pierce, KG, and Rondo has been awful. Time hasn’t helped, either. Allen was a no-show for Pierce’s jersey retirement in Boston in February, while Garnett, Rondo and Coach Doc Rivers attended together.

At a fundraiser in Boston this Tuesday, Rivers said that he was disappointed in the team’s fractured relationship with Ray.

“As years have gone on, things have been fractured, and I hate it. I hate seeing it. I would love this [to be a] celebration for Ray. Not a lot to say here about it. Ray won us a title. He really did.

“It’s a lot of little things. Here’s the thing: You have two Hall of Fame guys as far as their competitiveness. The reason that Ray was who he is, Rondo was who he is, Kevin, Paul — I think Paul has done the right thing as far as throwing out the olive branch. [But] it’s also why we were really good is why they don’t get along: very stubborn, very tough, very competitive and no one wants to give in.”

“The phrase I used to use a thousand times in arguments with the team: ‘It’s about getting it right, not who is right.’ I hope we can get that right because they are all probably right in whatever they are saying in some way or form, but they need to get it right and get together.”

As a Celtics fan who took so much joy in that 2008 win, I felt betrayed when Ray left to join LeBron. But, it’s been 10 years and the pettiness is beginning to take away from the achievements. I just wish they’d all hug it out.