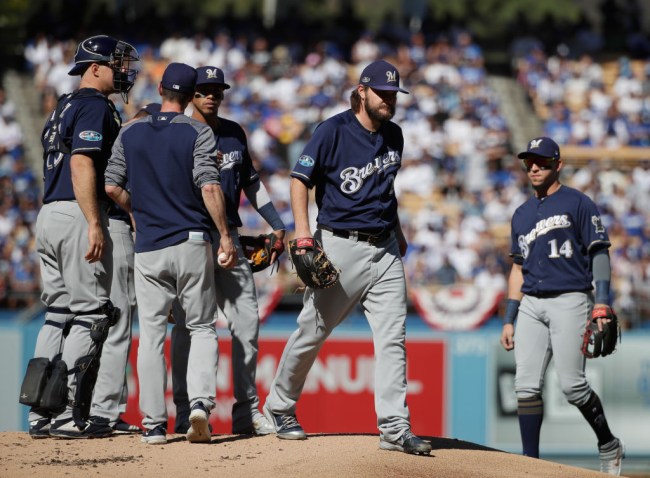 Reportedly, this was Milwaukee manager Craig Counsell’s plan all along.

The plan was for Miley, who was on a short three-day rest, to force the Dodgers to roll out a predominantly right-handed batting lineup, only to face the left-handed Bellinger before Woodruff took over. Miley is now available to start Game 6 tomorrow night. This strategy makes sense, but it’s historically rare. Baseball Reference points out that Miley was just the second postseason starter to face one batter in MLB history, via For the Win.

This unorthodox move caught the eyes of MLB players and fans who were equally confused.

No. Seriously. Wade Miley is out of the game after one batter.

See, we have a picture and everything as proof. pic.twitter.com/HsAv2WcGgg

back in my day starting pitchers went much deeper into games

Does, uh, Wade Miley have diarrhea or something.

Wade Miley is done after one hitter. So… this tweet aged well. https://t.co/e0CplnvRYq

A look at Wade Miley in Game 5. pic.twitter.com/vBVLVEB3Qy

The Dodgers would go on to win Game 5, 5-2, and pull ahead 3-2 in the series. They have a chance to punch a ticket to the World Series tomorrow night at Miller Park.