Red Sox Vs. Dodgers Live Stream: How to Watch Game 5 Of The World Series Without Cable 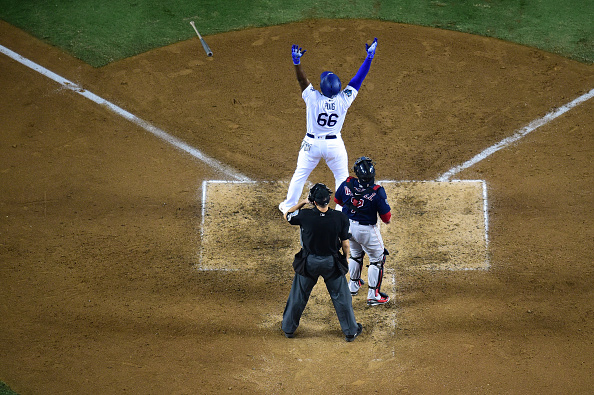 The Boston Red Sox and the Los Angeles Dodgers have been trading devastating blows with each other like heavyweight boxers during the 2018 World Series. But it will all come crashing down on the Dodgers tonight unless they can somehow manage to win Game 5. The boys in blue are hoping that the friendly confines of Dodger Stadium can help L.A. rebound from that crushing Game 4 loss.

The epic 18-inning marathon that was Game 3 was the longest game in World Series history. Max Muncy put the Sox to sleep in the wee hours of Saturday morning after belting a game-winning, walk-off home run in the 18th inning. Both teams combined to use 18 different pitchers including Boston’s Nathan Eovaldi, who pitched six great innings in relief and had to be scratched as the Red Sox starter in Game 4.

The invigorating victory cut Boston’s lead to 2-1 in the series, but then the Sox marched back late in Game 4 after being down by four runs in the seventh inning. The Dodgers were undefeated with a perfect 54-0 record this season when leading by 4+ runs. That incredible stat was torn to shreds by the Sox who erupted for nine runs in the final three innings to win Game 4 by the score of 9-6 and take a 3-1 series lead.

Things are not looking promising on paper for the Dodgers in their win-or-go-home Game 5. Will Dodgers’ ace Clayton Kershaw finally put forth a dominant pitching performance in the postseason? Something that the three-time Cy Young-winner has struggled with, especially in the World Series, where he has a 5.49 ERA.

The Dodgers will try to stave off elimination tonight in Game 5 vs the Red Sox. LA is 0-8 in its postseason history when trailing 3-1 in a best-of-7 series.

Game 5 starter Clayton Kershaw has a 6.28 ERA in 5 career elimination game starts. The Dodgers are 2-3 in those games. pic.twitter.com/EOYmJ47LJ0

The Red Sox will send David Price to the mound to try to clinch it for Boston and bring home their fourth World Series rings since 2004. There are so many questions going into Game 5 and you’ll be able to see who becomes tonight’s hero by watching the game at FUBO.TV. You don’t need cable to check out this epic possible elimination game and you can watch all of the action on the device of your choice. FUBO.TV is the easiest way to watch all your favorite sports games LIVE and its free to sign up. Game 5 starts at 8:15 EST, tonight, don’t miss another potential history-making moment.