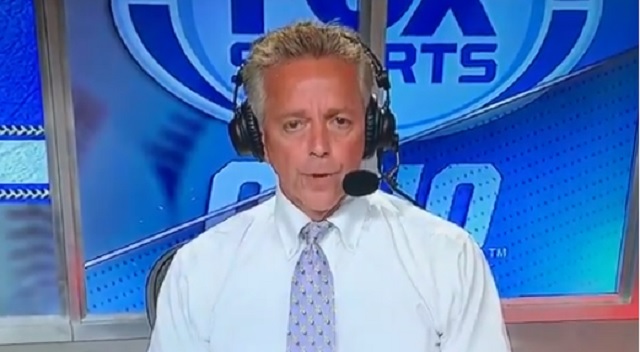 Thom Brennaman’s announcing career is likely over and his final home run call is one for the books.

Before tonight’s Reds-Royals game, Brennaman was caught using a homophobic slur on a hot mic after a commercial break.

Longtime Cincinnati Reds announcer Thom Brennaman was caught on a hot mic saying “one of the fag capitals of the world.” He is currently announcing the second game of the Reds’ doubleheader against Kansas City. pic.twitter.com/Uwz07eRIKv

Brennaman would later go on to apologize for using the slur while still calling the game which led to an awkward moment where he was forced to make a home run call in the middle of his statement.

DID THOM JUST CALL A HOME RUN WHILE APOLOGIZING HAHAHAHAHAHAH

no way did this just happen, this is not real pic.twitter.com/6ou1BkAhYW

“I pride myself and think of myself as a man of faith — as there’s a drive into deep left field.” https://t.co/GM812EDlVc

Perhaps the most ill-timed home run in MLB history https://t.co/JQg5pnCulk

This is the worst home run call ever. https://t.co/PB0EJBUzF3

Calling a home run while apologizing for uttering a homophobic slur on air is certainly something. https://t.co/FSrtdoqmhJ

Thom Brennaman starts apology, works in a home run call, finishes apology. One of the stranger moments in live sports TV. Known Thom casually a long time and he's been very nice to me … but this is not good. https://t.co/TMHbwlI24U

Update: Brennaman has been suspended by the Reds.