Report: Redskins Could Get Petty And Attempt To Sabotage Kirk Cousins From Getting Monster Long-Term Contract In Free Agency 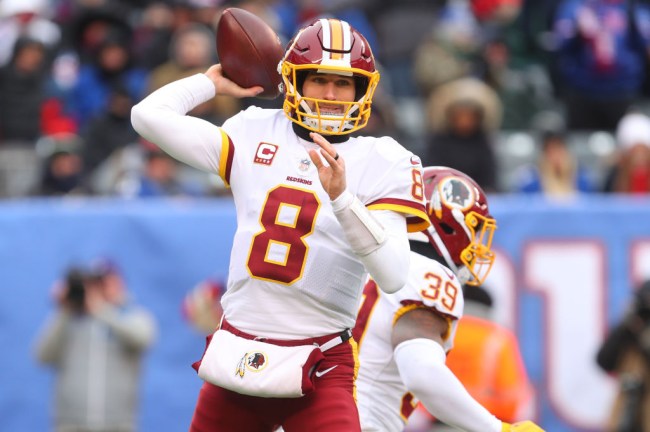 The Washington Redskins are apparently willing to fuck themselves instead of allowing Kirk Cousins to get a long-term contract in the open market.

According to Mike Florio of Pro Football Talk the Redskins might it hard for Cousins to get long-term contract by putting either the franchice or transition tag on him.

Washington will consider using the franchise tag on quarterback Kirk Cousins, as part of a plan to try to trade him. Although no plan premised on the franchise tag or the transition tag makes sense for Washington, nothing stops them from considering it.

As one source with knowledge of the manner in which Washington president Bruce Allen does business put it, Allen will try to conjure up something in an effort to salvage value for Cousins and, in turn, make it harder for him to hit the open market and finally get the long-term contract he deserves. As another source put it regarding Washington, “They are in the pettiness game.”

Of course the Redskins plan to sabotage Couisins could easily blow up in their faces if he decides to sign the tag.

If Washington applies the franchise tag, it will enter the 2018 league year with $34.47 million in cap space devoted to Cousins. Unless and until Washington rescinds the franchise tender, Cousins will continue to burden the books with a bloated cap number. That will make it harder to do business, especially when it comes to pursuing free agents from other teams.

If Cousins signs the tender, he’s guaranteed to receive $34.47 million in 2018. Washington could trade him once the tender is signed.

There’s also a chance that Washington would tag Cousins and, if he doesn’t sign it, rescind the tag later, after teams in search of veteran quarterbacks have signed who they want — and after the free-agency market softens. But as Washington demonstrated two years ago, even a late-April decision to remove the franchise tag won’t keep a great player from getting big money; that’s precisely what happened after the Panthers removed the franchise tender from cornerback Josh Norman, who quickly signed for market value in Washington.

This is all par for the course for the terrible Redskins franchise.