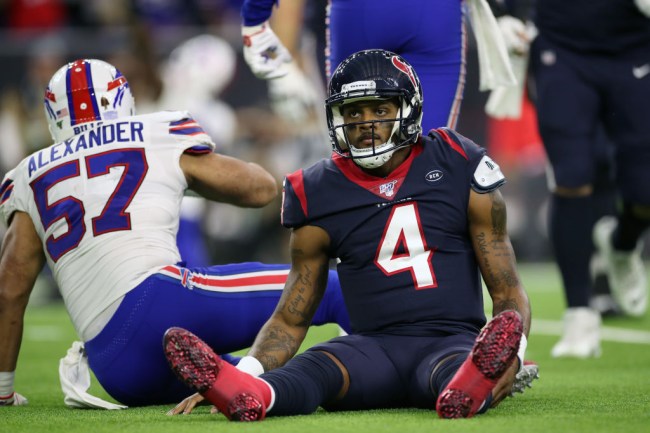 If you missed the second half and overtime finish in the Bills  – Texans game, I’m sorry, you missed quite the show.

After the Bills dominated the first half and took a 13-0 lead into the break, the Texans finally found their stride and put up 19 unanswered points. Josh Allen and the Bills managed a late field goal to send the game to overtime, but Buffalo was handed a 22-19 loss in Houston after an absolutely electric overtime period.

The wildest play of the game came during what was the eventual game-winning drive for the Texans when Deshaun Watson somehow avoided a sack after being lit up by two Buffalo defenders simultaneously before connecting on a big play.

On the very next play, Houston kicked the game-winning 28-yard field goal to punch its ticket into the next round, but none of that may have happened if the referees threw a flag earlier in the drive for a delay of game.

In a 3rd-and-18 situation, the play clock looked to have hit zero, but no flag was thrown. Watson went on to find Duke Johnson for a pick up of 18 yards and a first down on the play, but if ESPN’s graphic was synced with the actual play clock, it’s tough to argue against a delay of game penalty being called.

Refs missed a delay of game on that play. pic.twitter.com/5E4ED2hDXG

Why isn’t anyone, including Bills coaches losing their minds over that being a delay of game

This will surely sit well with Bills fans who haven’t seen their football team win a playoff game since 1995.

Add this moment to the story of what could have been one of the most entertaining playoff games in quite some time.