Report: Floyd Mayweather Owes $22 Million In Taxes To The IRS 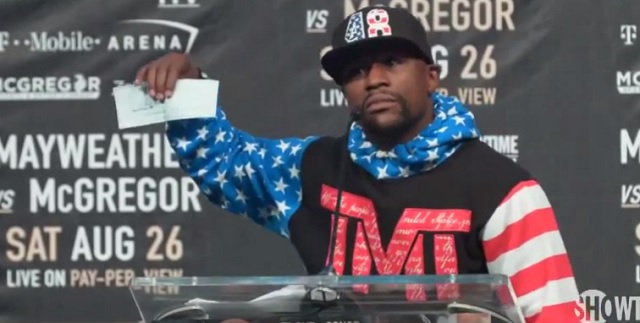 For the past week it has been reported that Floyd Mayweather owed the IRS millions of dollars in unpaid taxes from 2015. Before today, nobody knew exactly how much Mayweather owed until the Las Vegas Review Journal found the undefeated boxer’s $22-million tax lien.

“The lien on Mayweather, who has had several liens against him over the years, was filed in Clark County on March 6. The boxer appears to be taking advantage of a tax law to delay having to pay the IRS until he gets money from his boxing match against UFC superstar Conor McGregor, said Las Vegas-based tax attorney Bob Grossman.

The law provides Mayweather the right to a Collection Due Process Hearing.

Here's IRS lien against Mayweather. Says he owes $22,238,255 from 2015, when he fought Pacquiao. https://t.co/ObkR2ljOjV #MayweatherMcGregor pic.twitter.com/WGyXKkotVW

During today’s pre-fight press conference, Mayweather flashed a $100 million check and told everyone not to worry about his tax issues.

Mayweather declines to talk about the tax situation at #MayweatherMcGregor press conference, saying: "We ain't even tripping on that."