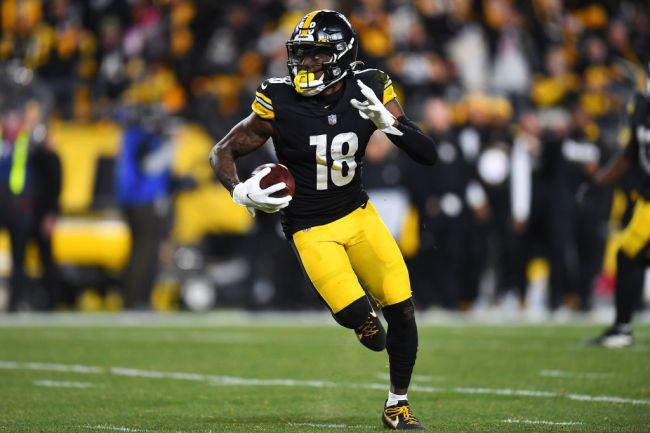 The Pittsburgh Steelers have a lot of questions to answer on the offensive side of the ball earlier on in training camp.

Last season, the offseason was a disappointment with Ben Roethlisberger not playing anywhere near the level Steelers fans had come to expect over the course of his career. Now, there is a quarterback competition brewing between Mitch Trubisky, Kenny Pickett, and for some reason, Mason Rudolph.

Unfortunately, that’s not the only question mark the offense is facing. Early on in camp, Diontae Johnson isn’t practicing as he pursues a contract extension with the Steelers.

According to a report from the Pittsburgh Post-Gazzette, Johnson and the Steelers aren’t particularly close to an agreement to get Johnson back to practice.

Refusing to give receivers the money they are looking for is nothing new for the Pittsburgh Steelers. They let Mike Wallace leave for the Miami Dolphins after his rookie contract expired. Emmanuel Sanders similarly headed for Denver once his rookie deal was up. Juju Smith-Schuster just joined the Chiefs after playing out a 1-year deal that kept him in Pittsburgh.

Now it seems to be getting more and more likely that we won’t see Diontae Johnson continuing to play for the Pittsburgh Steelers after 2022.

The going rate for the receivers from Johnson’s draft class who were looking for extensions this offseason has been set. We’ve seen AJ Brown, Terry McLaurin, DK Metcalf, and Deebo Samuel all get very similar deals over the past few months. Those deals all came in around $24 million per year.

With Chase Claypool already established on their squad and George Pickens impressing at camp, the Steelers may not feel the need to meet that value to hold on to Diontae Johnson. If that’s the case, we’ll probably see Johnson suiting up somewhere else next season and a ton of pressure put on Claypool and Pickens.