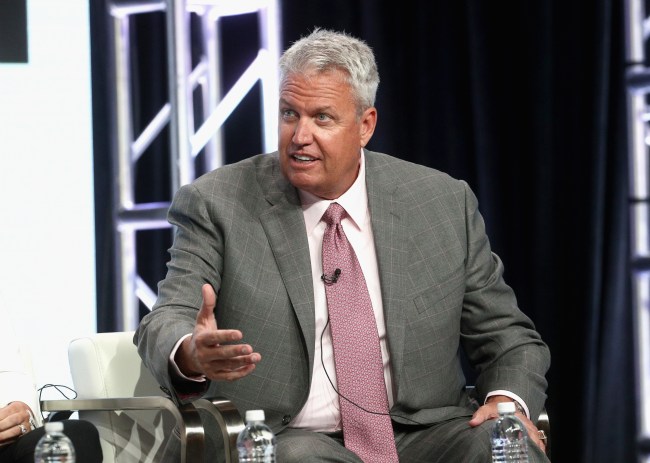 If there’s one thing we know about Rex Ryan — the former New York Jets head coach and current ESPN analyst who is as outspoken as they come — it’s that he’ll never hold back offering a good soundbite. “Sexy Rexy” has been one of the best personalities that football has seen in the past couple of decades, always providing something fun to talk about anytime he opens his mouth. It’s why most of us enjoy seeing him in front of a camera to begin with.

Since Rex Ryan rarely filters himself, he found himself spewing off about a topic that he seemed to find pretty intriguing; the Arizona Cardinals’ offense. Calling the offense “boring,” Ryan also questioned the coaching skills of first-year head coach Kliff Kingsbury, telling him to focus more on wins than talking up this (apparent) explosive offense.

Appearing on ESPN’s Get Up this morning, take a look at all the shade Rex Ryan threw at Kingsbury and the offense he’s running in Arizona.

Rex Ryan: “Basketball on grass. It’s so boring watching all this stuff right there. Come on, college football. I hope it gets smoked, also. I really do, because I think it’s so boring…. Kingsbury says ‘wait till Week 1.’ Oh, I can’t wait to see Week 1.”

Mike Greenberg: “Why? What will Week 1 look like that’ll be different from last night?”

Rex Ryan: “Nothing! There’s going to get whipped Week 1. Look, this guy… everyone talks about this great offense and all that. Yeah, if it’s fantasy football and you want points yardage, that’s great. How about wins?

“Kingsbury, let’s face it, had the best player in our league [at Texas Tech], he was 13-16 with Pat Mahomes at quarterback. How about you worry about wins?”

Man, most NFL coaches, former and current, seem to have a fraternity-like mentality that doesn’t often include this type of criticism, but Rex Ryan doesn’t seem to give a damn, because he’s going to speak his mind anytime he wants to, regardless of it being about a head coach.

Anybody who watched the Cardinals-Raiders preseason game last night is probably thinking the same thing that Ryan said this morning, because Kingsbury’s offense — and No. 1 overall pick Kyler Murray specifically — looked about as lost as a nun on a honeymoon. It wasn’t vanilla, it was just pathetic.

Look, it’s only the middle of the preseason and the Cardinals have a lot to improve on from last year — not to mention they’re doing it with a rookie passer and rookie head coach — so, while Rex Ryan has a point to question things, it’s still early to rip Kingsbury as he did. To bring up old shit from his college coaching days at Texas Tech, though? Well, that’s a pretty low blow from Rexy, and one that seems to me that he thinks Kingsbury might be under-qualified for the position of running an NFL franchise.