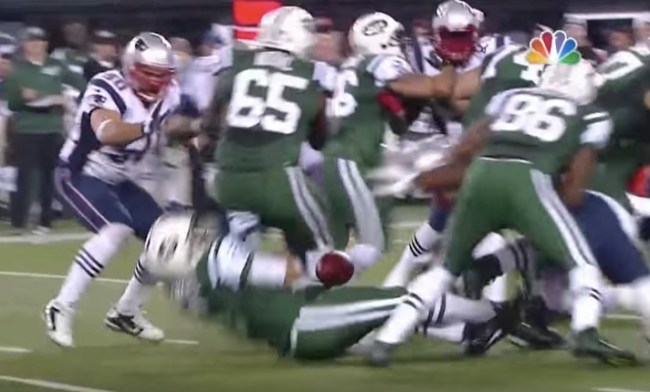 The ‘Butt Fumble’ has easily become one of the five most famous plays in NFL history. It’s debatably the most famous NFL play that wasn’t some sort of incredible offensive achievement.

I’m not sure how I missed this clip from ESPN which aired a few days ago starring Rex Ryan, former New England Patriots DB Steve Gregory, and members of the New York sports media reliving the play whose name has become synonymous with f*cking up, but I’m glad I’ve finally watched it.

I am 100% serious in saying that I use the phrase ‘butt fumble’ at least once a week to talk about some sort of blunder. It’s become such a regular part of my vernacular that I often use it without even remembering its ties to the NFL which is insane because this play only took place six years ago on Thanksgiving Day 2012 during the game between the New York Jets and New England Patriots.

It’s pretty amazing that ESPN was able to get former Jets head coach Rex Ryan to relive what was probably the most embarrassing moment of his professional career. And I’m not at all shocked that they weren’t able to get Mark Sanchez to appear in this segment considering this was the lowest point of his career and a play that will haunt him forever.

I can’t help but think about Woody Harrelson’s ‘Roy Munson’ character from Kingpin the entire time I’m watching that clip above. In that movie, they’re constantly referencing ‘being Munsoned’ which is basically up Shit Creek without a paddle. I have to think that Mark Sanchez is haunted by the phrase ‘butt fumble’ and that it follows him everywhere he goes.

Here’s that infamous butt fumble play from multiple angles just in case you want to keep watching it today.

I could watch that all day.