Ric Flair Goes Off On Former Agent In New Video, Accuses Her Of Stealing His Money 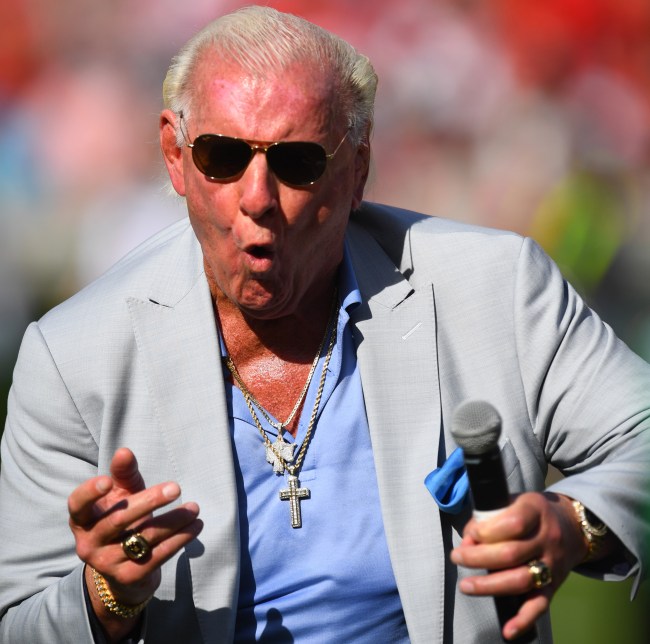 WWE Hall of Famer Ric Flair was recently in the news for a hospital stay that saw the 70-year-old wrestling legend rack up an outrageous $1.8 million medical bill to receive a pacemaker.

Now Flair says he feels better than he has in a long time and figures he’ll be around for at least another 25 years.

Getting That Old Time Feeling Back, Ready To Make Wendy WOOOOO On This WOOOOO Wednesday! pic.twitter.com/CwgD8gWWW2

Since his return to good health Flair has cranked his YouTube account back up, posting three new videos, the third of which was focused on Flair going scorched earth on his former talent agent Melinda Morris Zanoni.

“This video is for anyone who’s ever been screwed over by a lawyer,” Flair wrote in the video description.

“Let’s just start with the fact that she stole money from me,” Flair began the discussion. “She actually embezzled money from me — it’s documented, I’ve got the records, and I’ve talked to an attorney prior to making this video.”

Flair goes on to describe how he didn’t hear from Zanoni, who he says he’s known for 20 years – 10 years as his agent – when he was sick, except for some threats allegedly directed at him and his wife.

Now he says he’s got a new attorney and dares Zanoni to sue him, saying, “What is the wrong with you? Did you really think that at some point in time that wouldn’t catch up with you?”

“This is so overdue. Melinda, I don’t know how you live with yourself,” he later added. “Twenty years friendship, 10 years my agent. Not a text, you didn’t drive down to the hospital. You just didn’t give a sh*t. And you assumed I was gonna die, like a lot of people did. And you just grabbed all the money you could run with.”

Flair definitely isn’t acting like a guy with a pacemaker, as the first video he posted since his recovery had him ranting and saying things like, “I’m never gonna get old. I got a wife that wants a 35-year-old man every day of her life. She needs that 35-year-old man. I don’t care how many doctors tell me, ‘you gotta learn to grow up’ I’m not gonna act like my age, don’t ever tell me that! I’m paying you to make me better so I can be me. That’s me and that’s all i’m ever gonna be… good or bad.”