73-Year-Old Ric Flair, Who Has A Pacemaker And Is Going To Wrestle Again, Addresses Those Critical Of The Idea 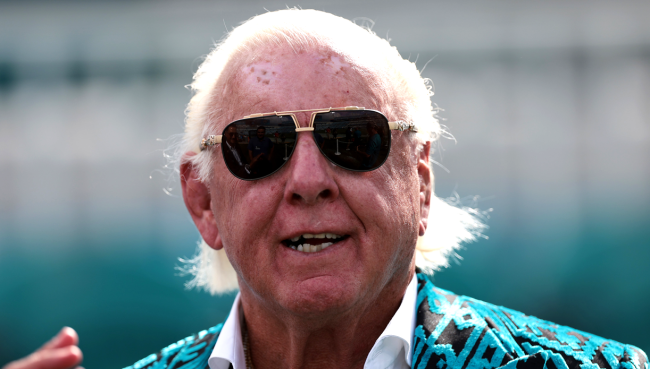 WWE Hall of Famer Ric Flair, who has “retired” numerous times, is 73 years-old. He first began wrestling in 1972 for the American Wrestling Association (AWA.) In 2022, on July 31 in Nashville, Flair will be wrestling again in yet another of his ever growing string of “last matches.”

This partcular “last match” will take place during STARRCAST V, a professional wrestling fan convention held at the Nashville Fairgrounds.

“I’m going to walk that aisle, one last time to prove once and for all, that to be the Man, you’ve got to beat the Man,” said Flair in a media release.

Who that man is that will try to beat The Man has yet to be determined, but we do know that it will not be 69-year-old Ricky “The Dragon” Steamboat, who was asked to participate and turned it down.

Naturally (sorry), many wrestling fans are very concerned about the health and well being of the 73 year-old Flair and do not want him to get back into the squared circle “one more time.” Others think that Ric Flair must be hurting for money to take such a risk at his age.

Ric Flair is going to wrestle again, despite all the critics

Neither of those things should be a concern, however, at least according to Ric Flair.

“For the 30% of people who are worried about me getting in the ring and wrestling again, first of all, I assure you that I’ve been in the ring a lot more than I’ve shown on social media,” the 16-time world champion said on his To Be The Man podcast this week.

“I’ve never been a cosmetic wonder boy, so I am going to wear a shirt but I can assure you that in two and a half months, I will put on a clinic of what real wrestling should be about.”

A very slow, methodical clinic, one would assume.

As for the idea that he is stepping back into the wrestling ring just for the payday, not a chance, he says.

“If you don’t see how much money I make from Cameo, that alone I can live on for the rest of my life,” said Flair. “I just made a commercial for Nu Image Rejuvenation Clinic, another commercial for Car Shield. My life is good, I don’t need the money but I do like the glory. I’m never going to walk away from it. If I have a chance to get myself over, I’m going to do it. It’s what I’ve been doing my whole life.”

Flair continued, “It’s not about the money, guys. I am going to make a lot of money because everything Conrad touches makes money,” Flair continued. “This is about me doing what I’ve done my whole life. I watch wrestling every day because I love it and I respect the guys in it.”

Flair, who has a pacemaker for his heart, claims a doctor gave him the go ahead so, yeah, it’s all good.