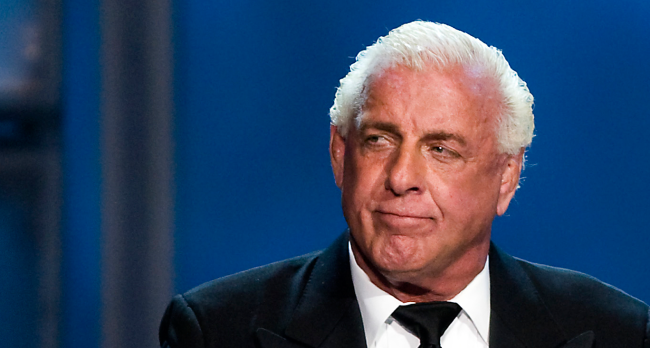 The latest episode of Vice’s docuseries The Dark Side of the Ring has resulted in some serious fallout for several former WWE stars including Tommy Dreamer, The Undertaker, and most of all, Ric Flair.

The episode centered on the infamous “Plane Ride From Hell” in which the WWE roster, returning from a tour of the United Kingdom, was forced to spend 14 hours on a plane due to delays with a seemingly endless supply of alcohol, drugs, and numerous instances of immature, offensive behavior.

During the episode, Ric Flair was accused by flight attendant on the plane, Heidi Doyle, of cornering her in the galley of the plane wearing nothing but his ring robe and physically forcing her to place her hand on his genitals.

She and another flight attendant, Taralyn Cappellano, later filed a lawsuit against the WWE over the wrestlers’ behavior during the flight and settled out of court.

Tommy Dreamer, who provided comment throughout the episode, was forced to apologize after the show aired for defending Ric Flair over allegations made by the women.

“If that’s how she felt, maybe she should have not taken a payout and went to the fullest extent of the law to then truly put this heinous person in jail,” Dreamer said during the episode.

That and his other comments about the alleged sexual assault resulted in Dreamer being suspended indefinitely by his employer Impact Wrestling. He was also suspended from his job on Busted Open Radio.

He later, of course, apologized.

Prior to the airing of the “Plane Ride From Hell” episode of The Dark Side of the Ring, Flair told Renee Paquette on her Oral Sessions podcast, “Just when things are going good for me. Listen, you put me on your podcast after. We’ll see how it plays out, because I was there and I don’t care whose name I gotta drop if the heat falls on me. I know who was where and what and who and what took place. I know the whole story.”

This week, Ric Flair, who was removed from a current advertising campaign being conducted by Car Shield as a result of the episode, released not one, but two statements attempting to defend his actions. The first came on Monday.

“Every person that I’ve worked with, from my lawyer to my publicist to my wife has said to not post a response; but I’ve never from past behaviors before and I’m not going to start now. I want to clarify a few things: About four years ago, I gave ESPN full access to my life for a ’30 for 30′ special. They covered taxes, financial issues, adultery, divorces, the passing of my child and drinking/partying AT LENGTH. Rory Kamp, desperate to matter for another 15 minutes, did an interview about it this morning. When Rory’s lips are moving, he’s typically lying, but one part of what he said was the God’s honest truth:

“‘I’d never heard that he had forced someone to touch his genitals,’ Karpf admitted. ‘Everything with Ric that was construed as negative I tried to address in the 30 for 30. His drinking, his philandering, his adultery, his money problems, there’s quite a bit, but never, at least in the people that I spoke to, no one ever brought up that he would force himself on somebody.’

“I allowed my personal life and the lives of my wife and children to be turned upside down for one reason: Whether it’s good or bad, even the really bad, the truth has to matter. Even in wrestling. My issues have been well documented over my 40+ year career. The impact of drinking too much (which nearly killed me 5 years ago) has been told time and time and time again. The reason Rory (or anyone else for that matter) never heard stories of me forcing myself on ANYONE is simple: it never happened.”

Related: Fans React To Ric Flair Being Portrayed As A Mega Creep In ‘Dark Side Of The Ring’ Documentary

Then, on Tuesday, Ric Flair was back with another statement, this time to Wrestling Inc.

“To clarify, the ‘helicopter’ as it was called, is accurate,” admitted Flair. “I wish I could blame it on youth, but it was a case of drinking too much and being inappropriate and I apologize for that (and have countless times over the years).

“I made some bad decisions during dark periods in my life, and it is something I’ve spent a significant part of years I was given by the doctors in 2017 trying to make right.

“I condemn sexual assault in any way, shape or form. I could (and have) written books (as have others) that have covered my transgressions. I’ve made some terrible decisions, but I’ve never forced myself on anyone in any way. Period.”