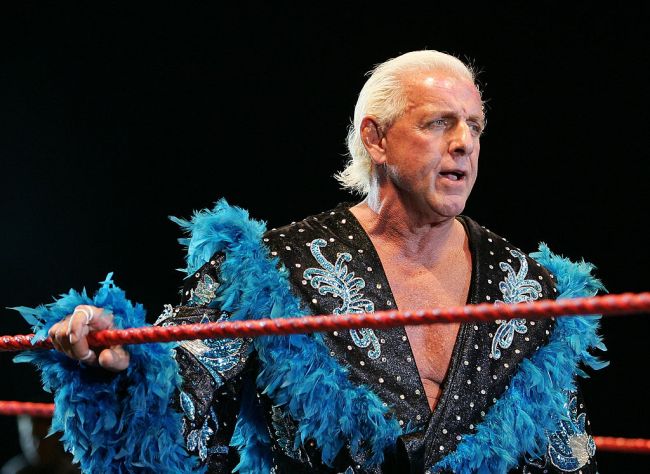 We chalked the Nature Boy’s claims that 10,000 women came aboard Space Mountain as Ric being Ric. When he essentially scraped the lining of his wife’s stomach during his wedding kiss, we were not nearly as startled as we should have been.

But in the newly released episode of Dark Side Of The Ring season 3 titled The Plane Ride From Hell, Flair’s flare entered into Creepville.

The story dates back to May 2002, when the WWE team was returning to the USA after a European tour. On top of Vince McMahon trying to wrestle Kurt Angle,  X-Pac cutting off Michael Hayes’ mullet, and Curt Hennig nearly causing a plane crash by trying to wrestle Brock Lesnar, Flair allegedly exposed himself on the plane in front of the stewardess and forcibly put her hands on him.

I have never lost respect for someone faster than I have with Tommy Dreamer after this. Holy shit. Also fuck ric Flair pic.twitter.com/zxzv7WXi5g

“I was in the galley. Ric Flair was naked and he decided to come back to the galley to get a Coke. Then he wouldn’t leave the galley. He had me back against the back door and I couldn’t move, I couldn’t get away from him.

He was spinning around his penis and he wanted me to touch it. He took my hand and put it on him.”

Flair responded to his name trending nationwide while speaking to Renee Paquette on her Oral Sessions podcast.

“God, I’ve heard about it too. Just when things are going good for me. Listen, you [Renee Paquette] put me on your podcast after. We’ll see how it plays out, because I was there and I don’t care whose name I gotta drop if the heat falls on me. I know who was where and what and who and what took place. I know the whole story.”

Me: “oh shit whys Ric Flair trending, is he officially all elite?”

Some people already knew this story. Some did not. It's not about "cancel culture." It's about reminding people of how bad it actually was.

Tony Khan to the AEW social media team about to send the Ric Flair is All Elite tweet: pic.twitter.com/b7Mcsb4NvK

Speaking of the garbage handling of the Plane Ride From Hell, WWE animated a "hilarious" retelling of it narrated by Ric Flair about five years ago for the WWE Network. Might even be on Peacock. #DarkSideOfTheRing pic.twitter.com/I1RCLDAsY4

Went to see why “Ric Flair” was trending. Fuck. pic.twitter.com/3tqW12XYtS

Tony Khan after he sees what Tommy Dreamer said & what Ric Flair did #DarkSideOfTheRing pic.twitter.com/UJpF3LgTLO

Ric Flair after tomorrow’s Dark Side of the Ring premiere pic.twitter.com/kHbfcq8gW2

Flair, a two-time WWE Hall of Famer, was released by the WWE back in August. Speculation quickly stirred that he’d join his future son-in-law Andrade El Idolo at the emerging All Elite Wrestling. Can’t imagine this publicity is appealing to AEW owner Tony Khan in the interview process. Wooo?