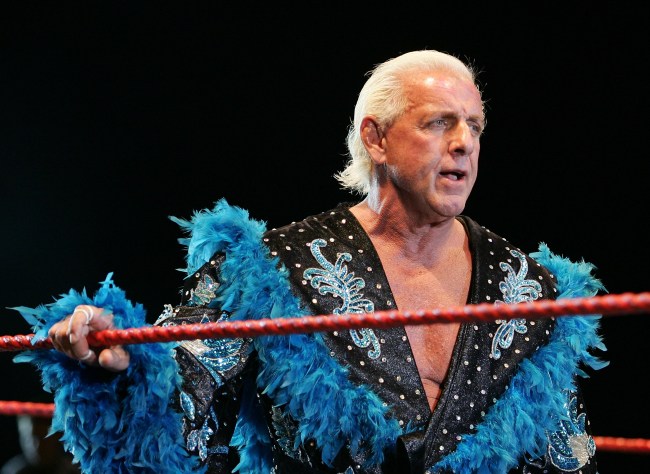 For nearly a decade of my childhood, I was under the impression that Ric Flair had a particular affinity for amusement park attractions and that the term “Space Mountain” was simply a reference to the oldest operating roller coaster in the state of Florida.

On my 18th birthday, however, my father sat me down and told me all that Space Mountain talk was actually just a euphemism for The Nature Boy’s stick and berries.

“Space Mountain may be the oldest ride in the park, but it has the longest line.”

Flair, a man who’s allegedly taken over 10,000 women aboard Space Mountain, doesn’t reach those numbers without mixing business with pleasure. 188 per year year for 53 years. 3.6 per week. How much can a man give.

Five-time world champion Booker T (& Queen Sharmell) appeared on our Endless Hustle podcast (subscribe or die) and confirmed that Ric Flair wasn’t just the people’s wrestler, the entire organization was in awe of his cartoonish ways.

Ric Flair could not possibly take 10,000 women on Space Mountain without doing a little multi-tasking.

WWE legend @BookerT5x adds to the legend of @RicFlairNatrBoy

“Everybody wanted to be Ric Flair, man.

It’s no secret or anything. Ric Flair was the guy who was cutting promos in Atlanta, Georgia at Center Stage pretty much to tell the ladies to meet him at Rupert’s [nightclub] at the end of the night.

I would make sure I showed up to Rupert’s as well!

Any man who kisses like this on his wedding day is operating on a higher plane.

Booker went on to talk about how much he respected Ric Flair as a colleague and friend, and how he is grateful for how graciously he passed the torch to a black man from a different era.

“Learning from Ric Flair, earning the respect from Ric Flair because I was one of those guys that started out at the bottom and ended up at the top. And Ric Flair was the guy who passed the torch to me and said, “Man, you’re the guy.”

That meant a lot because I knew where Ric Flair came from and the era that he came from, and the era that we’re living in right now. Seeing everything that’s going on on the street. Seeing up close and personal and going through changes to get to that point. To pass the ball off to me, a black man. It was cool.

Being able to wrestle Ric Flair in a singles match and learn so much just by osmosis of being in the ring with Ric Flair.”

Listen to our entire interview with Booker T & Sharmell below, where we discuss his relationship with Hulk Hogan after he called Hulk the n-word on national television, his respect for Pat McAfee, the best wrestler he’s worked with, his Reality of Wrestling promotion, and more.