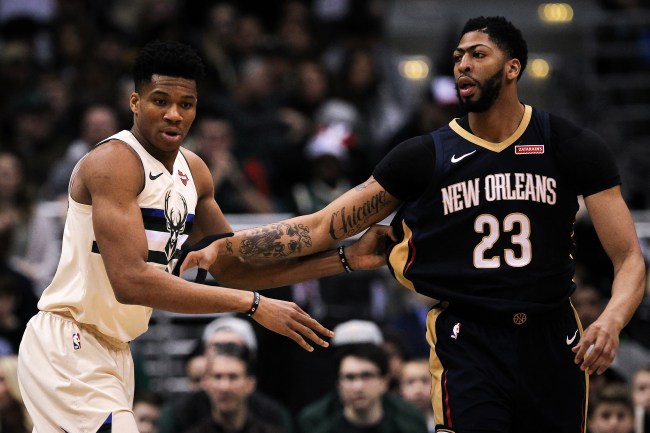 Rich Paul executed one of the most shocking, albeit anticipated, moves of the NBA offseason, getting his client, Anthony Davis, to the Los Angeles Lakers per his request during the middle of last season. And since AD instantly makes the Lakers the title favorites in the league now that he’s paired alongside LeBron James, his agent is touting the big man in pretty extreme ways.

That’s because, in a recent ESPN interview with Dave McMenamin, Rich Paul said that the Milwaukee Bucks would’ve reached last year’s NBA Finals had they had Anthony Davis instead of Giannis Antetokounmpo; which is pretty bold to say considering the “Greek Freak” won last season’s league MVP award. Of course, Paul didn’t mean to slight Giannis in any way, but instead was just gushing about how talented his client really is.

“He’s just as talented as anyone who’s ever played this game,” Paul said of the new Lakers star. “Six-11, makes 3s, blocks shots. I think he’s one of the better passing big men in our game. In my opinion, this is what makes him different from Giannis [Antetokounmpo].

“Like, if you put Anthony Davis on that Bucks team last year, they’d be playing in the Finals. He knows how to make guys better. That’s not a knock to Giannis, but that’s just what [I think].”

It’s interesting to hear something like this from Rich Paul considering the fact the Lakers are hoping to make a run at signing Giannis Antetokounmpo in the near future. Of course, that won’t happen tomorrow, but would Giannis seem a little disrespected by an agent representing Davis and James? Maybe. That could play a weird role in negotiations — since, you know, all athletes seem to be so sensitive these days.

As for Rich Paul’s claim, he may want to go back and check the stats again. He’s clearly admiring his own client and giving Anthony Davis all the props in the world — speaking about him as being the best player in the world — but it’s hard to argue against the numbers Antetokounmpo put up last season. Overall, it seems more like a wash between the two than anything else, so to hint that Davis would’ve led the Bucks to the NBA Finals is a little ambitious for Paul to suggest.

There’s no denying both Anthony Davis and Giannis Antetokounmpo are top-5 players in the NBA, so this is really just apples to apples, but it’s hard to find a reason why Rich Paul would take a seemingly innocent swipe at the reigning league MVP by boasting about his own client in the process. But, hey, Paul is a master at his craft, so there’s probably some strategy behind it all.