Anthony Davis On Playing With LeBron James, His Lakers Future And Why Rob Pelinka Texted Every ’30 To 45 Minutes’ During Free Agency 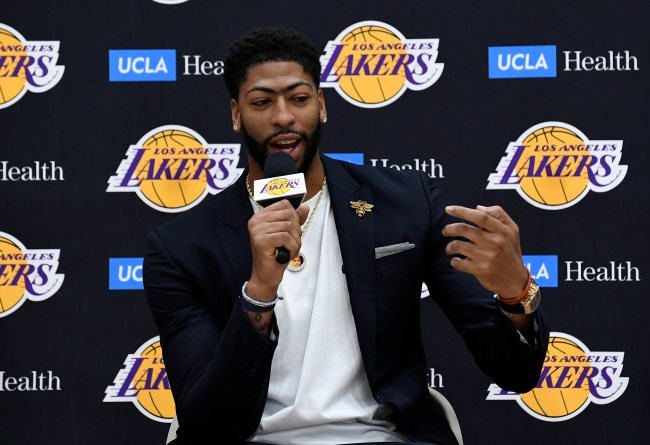 Anthony Davis was officially introduced as a member of the Los Angeles Lakers over the weekend, giving NBA fans a glimpse of what he’ll look like in the purple and gold — while showing off a new jersey number, No. 3. While it’s presumed that the Lakers are just going to march through next season and win a title, as any sports fan knows, it’s not necessarily that easy, as expectations and chemistry and unforeseen circumstances can derail and entire season.

Sure, Anthony Davis is one of the top-5 best players on the planet, but will he be able to adapt to playing for the iconic franchise? How will he mesh with LeBron James? What about his pending free agency next summer, with Davis saying during his introductory press conference that he wouldn’t commit to the Lakers beyond this year? It could all be a recipe for more dysfunction if the team allows it.

Sitting down with ESPN’s Rachel Nichols, Davis gave a glimpse of his excitement after joining a new franchise, what he thinks it’ll be like playing with James and described the communication with Lakers general manager Rob Pelinka during the wild NBA free agency this summer. Here’s what he had to say about some of those topics.

ESPN: Getting here didn’t come without a cost for you, though. You asking for a trade in the middle of the season was very unpopular, and then that request and the botched nature of the negotiations after that is what a lot of people think derailed two teams’ seasons. Why do it? Why do it then, instead of just waiting until the summer

AD: “I knew I wasn’t gonna sign an extension and that my time in New Orleans was definitely coming to an end. And, you know, I see a lotta people that say, “Wait –” or “You shoulda did it this way, that way.” But for me, I’ve been in the league long enough. I’m a grown man. I know what I want. And so I thought doing it at that time was definitely going to be beneficial for myself and for the organization to get the best package available, so that way the organization is still set.”

ESPN: Do you wish you did anything differently?

AD: No. I wish I did it the way I did it. I’m a person who’s very upfront and honest. You know, I want to tell you what it is. I love the city of New Orleans, but from a professional standpoint and occupation in basketball, I felt like it was time for me to move on.

While Anthony Davis said he doesn’t regret anything with how he handled the situation with his former team, the New Orleans Pelicans, it took some growing up for him to make a trade demand, admitting that he wanted to start taking back control in his life and stop just doing what everyone else wanted him to do.

ESPN: You and I have talked a lot through this last season. And every time we talked, you made it so clear to me that this was about you taking control of your life. Why was that such a big theme for you this year?

AD: Because I allowed people to tell me what to do and advise me to do this or that. And now, by me being able to take control of my career, any decision that I make, you know — I can sleep at night. I’m good. That was the biggest thing for me. I was having a lot of regrets and thinking, I should have done it my way. Or, I should have done this differently. But now it’s like, when I do it my way — I’m able to sleep at night and not care what other people’s opinions are.

Now that he’s part of the Lakers, he knows that there’s an opportunity to play with, arguably, the greatest basketball player ever, LeBron James. And while guys like Kevin Durant and Kawhi Leonard have said they have no interest in playing alongside the three-time champ, Anthony Davis is looking forward to the opportunity; especially if it leads to a title.

ESPN: There have been some players, like Kevin Durant, who’ve come out publicly and said, “I won’t play with LeBron because of all the other stuff that comes with it.” Why was it something you did want to do?

AD: I don’t really care about the media attention. You know, I just want to play. And, obviously, playing alongside one of the future Hall of Famers in LeBron makes it a lot easier. So, I know it’s gonna come with the territory, but at the end of the day, I focus on the end goal, and that’s about winning the championship.

After Davis tried recruiting a few of the big-name free agents to the Lakers this summer, he admitted that Pelinka was contacting him every 30 to 45 minutes to ask him questions and give him updates. It sounds like it came at some inconvenient times, but the All-Star big man seemed to appreciate the communication.

ESPN: How often did you, LeBron and Lakers GM Rob Pelinka talk on the phone during that crazy week of free agency?

Finally, Anthony Davis left the door open about his hoops future come this time next year. While he seems happy to be a Laker, when asked directly about being described as a “pillar of the Lakers” in the future, as well as his thoughts on free agency next year, he was quick to shoot down the notion that he’s ready to commit.

ESPN: At your introductory press conference, they introduced you as someone who they hope will be a “pillar of the Lakers for a decade to come.”

ESPN: You’re only signed through this season. Do you think you will be a pillar of the Lakers for years and years to come?

AD: Honestly, Rachel, I’m just focused on this season. I don’t know what’s going to happen. I have one year here, so I’m going make the best of this year. And when that time comes around in the summer or, you know, whenever the season’s over — hopefully, around, you know, mid-June, after we just had a parade, and I need a couple days to think — then we can talk about that. But until then, I’m trying to do whatever I can to help this team win this year.

That last part about free agency is interesting. Sure, because Anthony Davis is playing alongside LeBron James on one of the glitziest sports franchises, many believe it’s a foregone conclusion that he stays. But what if there’s continued trouble in LaLa Land? What if the experiment fails? What if the Lakers can’t win a title? What if his free agency becomes a distraction all year long and holds the team back? Lakers’ fans might be excited about what’s to come next season, but who knows what years after bring.

You can read the entire conversation between Anthony Davis and Rachel Nichols on ESPN.com.