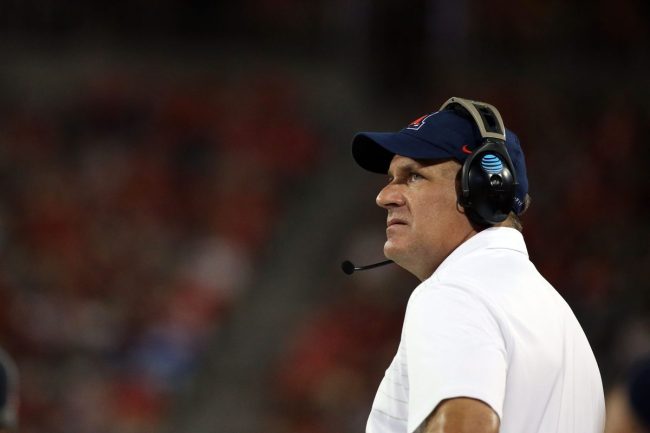 The Gamecocks hired Rodriguez at the conclusion of a 2021 campaign where the program posted a 5-6 record. The coach rose to fame in the early 2000s as head coach at West Virginia where he helped the Mountaineers reach new heights. Behind the duo of Pat White and Steve Slaton, WVU nearly made a national championship game appearance.

He then moved on to Ann Arbor, where he failed miserably. Rodriguez went 15-22 with the Wolverines before being fired. Arizona picked him up a couple of years later, but after six seasons, the two sides parted ways.

Now, he’s testing his luck at the Group of Five level. And he’s making huge waves with some comments made in a press conference ahead of his Jacksonville State opener.

Rodriguez has accused the Stephen F. Austin staff of sending spies to watch their Spring Game back in March.

“I heard from a pretty good source it’s true that they had a couple staff members at out Spring Game, which is kind of like, uh, not really supposed to happen. But now we’re making plans accordingly, you know, so if they’re over there thinking they have our plays or what have you, or signals, or something like that, we’ve changed things since the Spring.”

Rich Rodriguez continued on, saying that there’s been a more recent spying attempt, which he successfully thwarted.

“Then we caught somebody trying to film something the other day. First, my daughter called. Raquel saw them. Then we caught him again, saw him peering through there with his camera. I sent the biggest guy in our program, Crew, one of our assistant strength coaches. He’s about like 6’7″, 350 [pounds], probably benches like 1,000 pounds of something. Sent him up the bleachers to run him out and that guy disappeared pretty quick.”

Um, what?? I honestly don’t’ know what to believe but I am now pumped to watch the Gamecocks take on the Lumberjacks this Saturday.

College football fans quickly responded to hearing Rich Rodriguez’s spying accusations. Some laughed off the comments of paranoia while others noted the decline of Rodriguez’s career.

But all agreed on one thing: College Football is BACK!

Talk about a fall from grace, going from one of the biggest coaching gigs in college football to accusing foes of cheating in the Group of Five.

But Rich Rod did provide fans with college football’s first ‘THIS LEAGUE’ moment of 2022.

College football is the best sport on the planet and you’re wrong if you disagree https://t.co/QZjvsfjCOu

College football is officially back. https://t.co/BbzFhtNNUj

Football season is finally upon us. And this Week 0 slate just got a LOT more interesting.