LeBron James’ Former Teammate, Richard Jefferson, Explains Why The King’s Out To ‘Destroy As Many People As Possible’ 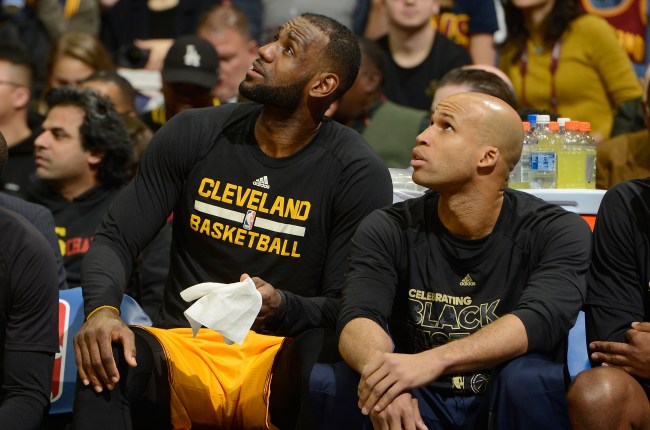 Richard Jefferson knows that LeBron James has a lot of fuel for the upcoming season. As James’ former teammate on the Cleveland Cavs — where the two won an NBA title together — and one of his good buddies who regularly stays in touch with the superstar, Jefferson sort of has the inside scoop as to what motivates James; and he thinks the four-time league MVP will be out for blood once the season starts.

After missing out on the playoffs for the first time since his second season in the league, LeBron James isn’t just trying to prove that he’s, arguably, the greatest player of all-time, but he’s trying to show everyone that he’s still as dominant a force as he’s ever been; even though he’ll be turning 35 years old in December. In Richard Jefferson’s mind, he thinks that the level of disrespect from others has motivated James like never before, and the former baller explained why the rest of the NBA needs to be on notice.

Appearing on ESPN’s Get Up, Jefferson talked about how the media’s perception of James has reenergized him in a different way this offseason, with the three-time champ out to show he didn’t just sign with the Lakers for the bright lights of Hollywood, but, instead, to continue chasing titles.

“LeBron James will be the best player in basketball again,” Jefferson said. “Now, will he be the LeBron James from ’08, chasing down blocks–no. But he is going to do so many different things. And with Kyle Kuzma and Anthony Davis on his team, he’s going to be able to be that dominant guy again.”

“I think he understands the disrespect. He’s felt it over the course of his career at different levels. Now, it’s you’re old, you had your first injury. Now you’re not that guy anymore,” Jefferson continued. “But I think really and truly, he’s more focused on proving to people that basketball is the most important thing to him. And the only way to do that is to go and destroy as many people as possible.”

After adding both Anthony Davis and DeMarcus Cousins to go along with a maturing Kyle Kuzma, the Lakers are among the current favorites to win the NBA title next season. And with LeBron James playing with a chip on his shoulder — which, if sustained for an entire year, is scary AF for the rest of the league — it’s safe to assume that Richard Jefferson’s prediction could hold true.

If there’s one thing we should all know by now, great athletes love being counted out, and James is one of those all-timers who thrives under pressure, using doubt from outsiders to elevate his game. So, go ahead and bet against the guy at your own risk, because LeBron could be out to disrespect people all season long to shut people up.