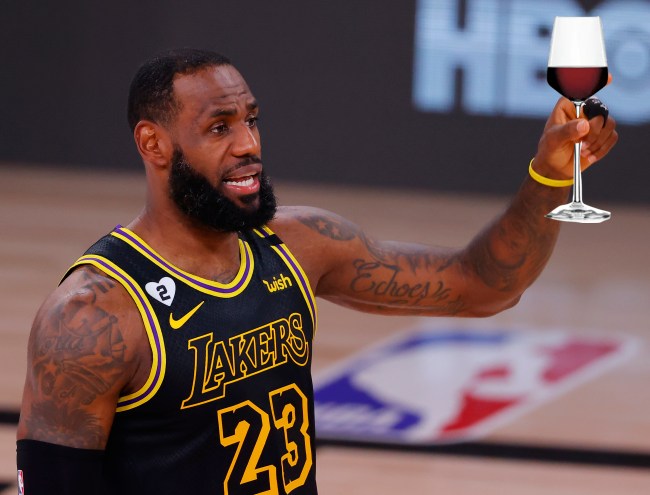 “I’ve heard it’s good for the heart, Listen, I’m playing the best basketball of my life, and I’m drinking some wine pretty much every day. Whatever it is, I’ll take it.”
-LeBron James, 2018 (ESPN)

It’s been well-documented in player revelations and his own wine-fueled Instagram posts, LeBron James loves vino more than Becky discussing her devastating breakup at a This Is Us watch party with a guy who never called her his girlfriend to begin with.

…LeBron the guys are out back drinking whiskey and resisting vulnerability when you’re done talking about “the one that got away.”

LeBron friend and former teammate Richard Jefferson was essentially told Complex that LBJ deals with the stresses of dragging Anderson Varejao to the Finals with a $1,700 bottle of Chateau Pontet-Camet.

He’s happy. That’s cool because he’s such an intense individual and he cares so much about winning and he cares so much about his teammates and wants everyone to succeed, very similar to [Michael] Jordan. But you have to bring something to the table. I’ll say this about the Lakers in Game 1 [against the Blazers], not that it was any other guy’s fault, but imagine being in that hotel room and you turn on the TV and see that LeBron James did something that had never been done in NBA history with 25 points and 15 and 15 and you lost the game because you guys shot 12 percent from three. You have this feeling of like you know how much he cares, you know how he plays, you just have to do more to contribute to that table.

So when he calms down and he has a couple of glasses of wine, he’s lovey-dovey, he’s apologetic because that’s him. You see all of his emotions all of the time. He’s not Kawhi Leonard who is a cyborg who shows no emotion. Your strengths can be your weaknesses. Kobe Bryant was one of the most intense guys in the world, but he was hard for his teammates to understand. LeBron is super, super emotional so it looks like he’s yelling [at] or berating teammates. But he’s also the first guy to either apologize or you just understand who he is as a creature.

I know it’s become chic to hate on LeBron, but this dude was the face of the NBA before I sprouted my first pubic hair and was never embattled or unprepared or forced out of the league to play low-level baseball in Alabama.

So if LeBron wants to pound a Nashville bachelorette’s haul of Noir before a playoff game, he has my total blessing.

We all have our vices, after all.