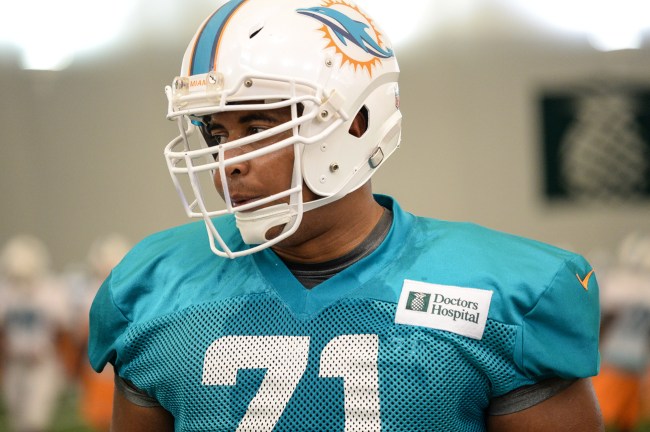 Former NFL offensive lineman Jonathan Martin made a big oopsie in February 2018 when he posted a bizarre, alarming Instagram of a shotgun and ammunition couple with the caption, “When you’re a bully victim & a coward your options are suicide or revenge.” Martin tagged the name of the former private high school he attended in Los Angeles as well as three other accounts belonging to former Miami teammates Richie Incognito, Mike Pouncey, and the Dolphins.

The school shut down for the day amist the threats and Incognito fled to meet with an FBI agent at a safe house about two hours north of Scottsdale, Arizona, according to the Miami Herald.

Martin was charged in March with four counts of making criminal threats and one count of possessing a loaded firearm, although one charge was dropped Wednesday when Pouncey said he was not concerned about the post.

Martin’s lawyer argued that his client meant no harm by the post, but at LAPD detective found that Martin looked up a story on Richie Incognito before he bought a shotgun. When Incognito learned of the post later in the month, he went into hiding. Via the New York Daily News:

Det. Peter Doomanis further testified that Incognito was so freaked out when he learned about the post on Feb. 22, he hopped in a car with his dad, brother and dog and drove north from Scottsdale, Arizona, for two hours to meet an FBI agent at a safe house.

“He described being in a state of panic. He was in fear,” Doomanis said.

Martin sent texts to his family and friends shaming himself for not being able to stand up to his harassers, dating all the way back to grade school. Those messages included:

I figured out a major source of my anxiety. I’m a push over,  a people pleaser. I avoid confrontation whenever I can, I always want everyone to like me. I let people talk about  me, say anything to my face, and I just take it, laugh it off, even when I know they are intentionally trying to disrespect me. I mostly blame the soft schools I went to,
which fostered within me a feeling that I’m a huge pussy, as I never got into fights. I used to get verbally bullied
every day in middle school and high school, by kids that  are half my size. I would never fight back, just get sad &
feel like no one wanted to be my friend, when in fact I was just being socially awkward. Most people in that situation are witty & quick with sarcastic replies, I never have been.