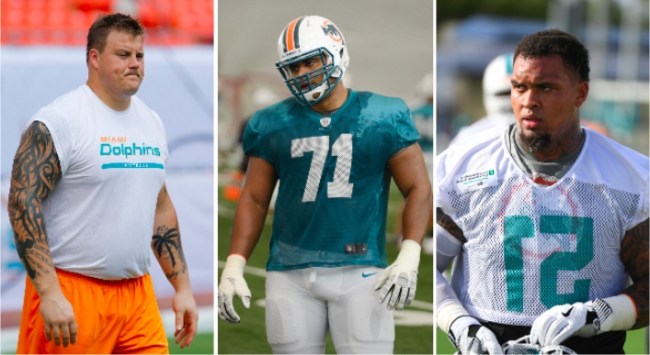 What could possibly drive a grown man–a Stanford-educated man–to make aggressive threats against his former colleagues that would cause one to go into hiding? How could someone be so disassociated that those same threats caused a high school to close for a day and bring on four counts of making criminal threats?

It’s impossible to attribute one single incident to the February 2018 breakdown of former Dolphins’ offensive lineman Jonathan Martin, but after news broke yesterday of former Miami teammate and career bully Richie Incognito going into hiding after Martin posted a threatening message on Instagram, I felt compelled to re-visit the 2014 shitstorm that led to Jonathan Martin leaving the team and checking himself into a hospital.

Suffice it to say, I was shocked at how aggressively Richie Incognito and teammates Mike Pouncey and John Jerry went at Jonathan Martin. This shit was beyond bullying and ventured into morbid obsession territory.

The “you’re my bitch” comments added to name-calling that had begun in 2012, Martin’s rookie season, when Incognito, Jerry and Pouncey began regularly calling Martin a “cunt,” a “bitch,” a “pussy” and a “faggot.” [via]

A sad underlying detail of this saga is the text messages Martin was sending to his family about helplessly being a pushover and letting people walk all over him, dating back to his grade school days.

I figured out a major source of my anxiety. I’m a push over,  a people pleaser. I avoid confrontation whenever I can, I always want everyone to like me. I let people talk about  me, say anything to my face, and I just take it, laugh it off, even when I know they are intentionally trying to disrespect me. I mostly blame the soft schools I went to,
which fostered within me a feeling that I’m a huge pussy, as I never got into fights. I used to get verbally bullied
every day in middle school and high school, by kids that  are half my size. I would never fight back, just get sad &
feel like no one wanted to be my friend, when in fact I was just being socially awkward. Most people in that situation are witty & quick with sarcastic replies, I never have been. [via]

If Martin was hurting, Incognito and his teammates either didn’t care or preyed on his weakness. It sounds like the latter. Incognito then took aim at Martin’s sister, in explicit text messages that were exposed. [Warning: NSFLife]

Incognito and Pouncey would reportedly call Martin’s sister a “squirter” at practice and then squirt water onto the field from their water bottles.

Martin wasn’t the only guy Incognito and Pouncey took aim at–Martin was one of three Dolphins employees who were treated like shit. One of those men was an assistant trainer from Japan, who was the recipient of numerous racial slurs (“Jap, Chinaman, chink, dirty communist” to name a few). Incognito also reportedly called the trainer’s mother a “rub and tug masseuse” and claimed that he had sex with the trainer’s girlfriend.

Richie Incognito has been evidently dealing with some mental health issues of his own, which could help explain why he was so committed to breaking his teammate. It’s no excuse, but it’s certainly more of an excuse that Mike Pouncey was equipped with.

I’m not one to easily call “bully!” in the dealings of grown men, but holy shit, I’d probably cry myself to sleep on a nightly basis if I was subject to half of this garbage.