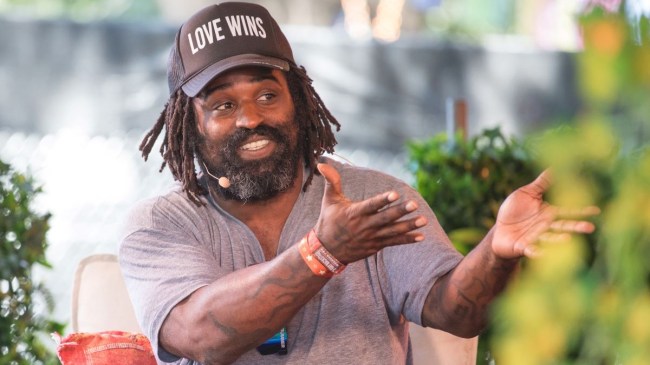 It’s been a while since we’ve heard from old friend Ricky Williams. The former Heisman Trophy winner and Pro Bowl running back has since changed his last name to Miron after taking the name of his wife of five years, Linnea.

“Sixteen years ago, Ricky discovered astrology as an excellent guide to finding and understanding himself. Time booked in consultation with Ricky is spent taking a long, deep look in the astrological mirror. The common experience of those who talk with Ricky about their chart is that they feel “seen.” Once you see who you really are, you begin to realize your wholeness—your healing.”. – RickyWilliams.Life

Andy Nesbitt of USA Today recently caught up with Williams to discuss a number of topics. Among them was Green Bay Packers quarterback Aaron Rodgers.

Though the four-time NFL MVP swears the drug isn’t, well, a drug.

Williams, an avid supporter of medical marijuana use as well as various other hallucinogenics, felt Rodgers using ayahuasca was good for him.

“I do a podcast once a week with Dan le Batard and we integrate astrology. And so, Aaron Rodgers’ astrological chart is online, and so we’ve talked about it a few times,” Williams said. “And, for me, when I heard him speak about it I like lit up. Because it’s like he’s living his true self, you know? There’s so much pressure to be, when you’re the MVP of the NFL, to not share those parts of yourself. And for him to be able to use that platform and to share that, I thought it was amazing. And how many people are now going to be more open-minded to look to going down these channels to improve the quality of their life because you had the courage to speak up? So I think it’s great.”

The ayahuasca trip hasn’t done much for Rodgers’ play on the field this season. The Packers are just 3-3 and Rodgers is averaging 233.8 yards per game to go along with nine touchdowns and three interceptions.