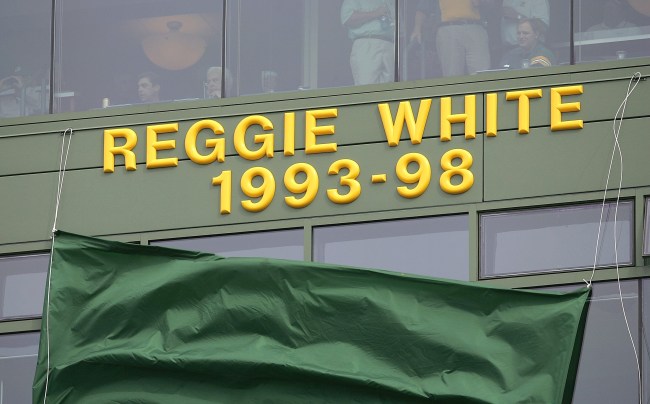 GREEN BAY, WI - SEPTEMBER 10: The name of the late Reggie White of the Green Bay Packers, inducted into the NFL Hall of Fame this summer, is unveiled before a game between the Packers and the Chicago Bears on September 10, 2006 at Lambeau Field in Green Bay, Wisconsin. (Photo by Jonathan Daniel/Getty Images)

The NFL salary cap has risen from $120 million in 2012 to $167 million in 2017, escalating $10 million annually over the last 4 years; while the value of rookie contracts has simultaneously declined after the players negotiated to increase cap allocation for veterans, within the 2011 collective bargaining agreement. The current CBA also allows for teams to roll over available cap space to the next season, creating a situation where teams can stockpile money (see: Browns, 49ers and Jets all have over $100 million to spend this offseason). Those large sums of available cap space have changed the perception that free agency is a collection of desperate teams overpaying to acquire talent on the decline, to a viable roster-building strategy with empirical data to support those beliefs; 6 of the top 10 spenders during the 2016 offseason made the 2017 playoffs, with the Jaguars (spent $20 million more than anyone else last offseason) turning it around from 3-13 to 10-6.

Howie Long-Short: NFL players are underpaid relative to athletes in other professional sports. Their careers are shorter, their contracts are rarely guaranteed in full and there are simply far more players divvying up the revenue allocated. NFL teams also don’t tie contracts to a percentage of the salary cap, so as the cap rises, star player contracts become relative bargains. Only once a player receives a franchise tender (a tactic used to retain valuable free-agents) is the contract tied to a percentage of the salary cap, and even then, it’s an average of the Top 5 players at the position or a 120% increase from the year prior; far less than a player could earn on the open market.

Fan Marino: The Jets gave up a 1st and 3rd round pick to acquire restricted free-agent (and current HOF) Curtis Martin in March of 1998. There was another 1998 free-agent signing that receives far less acclaim, but deserves to be recognized among the all-time great free-agent acquisitions. In February of 1998, the Jets made Center Kevin Mawae the highest paid player at the position with a 5-year $17 million contract. Mawae, who went on to play 8 seasons with the Jets, including 7 times as a First Team All-Pro, is a 2018 HOF finalist. Pro-football-reference.com, compares Mawae’s career to those of Mike Webster, Gene Upshaw, Jim Otto, Larry Allen, John Hannah, Gary Zimmerman, Will Shields, Walter Jones and Jonathan Ogden. What do all those guys have in common? Their busts reside in Canton, Ohio.

Kering (OTC: PPRUY) has announced plans to spin off a majority stake in Puma SE (PMMAF), enabling the company to focus on its high-margin luxury brands Gucci, Yves Saint Laurent and Balenciaga. CFO Jean-Marc Duplaix indicated the group would also look to rid itself of the boardsports label Volcom. The company will distribute 70% of Puma shares to its investors, reducing its own stake to 16%. The transaction price will be determined at April’s shareholder meeting. PPRUY shareholder Groupe Artemis (see: Francois Pinault), will become PMMAF’s largest shareholder; controlling 29% of the company.

Howie Long-Short: Kering paid $6.4 billion for Puma in 2007, slightly above the current market cap ($6.1 billion); despite the stock price climbing 45% over the last 12 months. Despite not yet having capitalized on the turnaround (profits fell from $324 million in ’07 to $6.3 million in ’13, before rising to $161.5 million over the first 9 months of ‘17), it makes sense for Kering to sell their sportswear (and lifestyle) brands; as Duplaix explained, the company has found itself in “a sort of imbalance, linked to the outperformance of the luxury sector.” In other words, their sportswear businesses were dragging down the overall performance of the company; particularly Gucci, among the hottest names in fashion.

Fan Marino: PMMAF, the German footwear and sports apparel manufacturer, will report full year earnings on February 12th; after having increasing profit guidance 3x in 2017. The company turnaround can be attributed to a refocusing on the world’s most popular sports (soccer, running, motorsports) and a boost in women’s sportswear sales. Puma publicly stated it welcomes the transaction, but shares closed -4.4% on Thursday amid concerns the company lost a powerful backer.

Howie Long-Short: To boost advertiser interest, Snapchat commissioned a recent study (using internal data and insight from Nielsen) on the company’s “unique audience”; users more active on SNAP than they are on other social platforms. The study focused on a subset of users interested in sports and sports-related content. It found SNAP users are more likely to be sports fans (i.e. watch, attend, stream games) than non-users, are more active on their smartphones at sporting events (important to activate and connect with fans) and “feel a stronger connection to sports” (i.e. spend more on officially licensed products). That sounds like a platform all sports leagues might want to explore.

Fan Marino: Twitter is reportedly exploring the concept of implementing micro-payments that would enable sports fans to watch the endings of close games; think iTunes for sporting events. I don’t see it. Fanatics (or gamblers) who would care about the ending of a close game, already have access to the out-of-market packages. The casual fan will simply continue to catch the highlights as soon as the game ends, for free. Proponents of this idea point to video games and the success in-game micro-payments, but gamers are engaged. I don’t believe that’s a valid case study.