Rob Gronkowski’s Dad Once Detailed How Insane Raising Five, Massive Sons In One Household Really Was 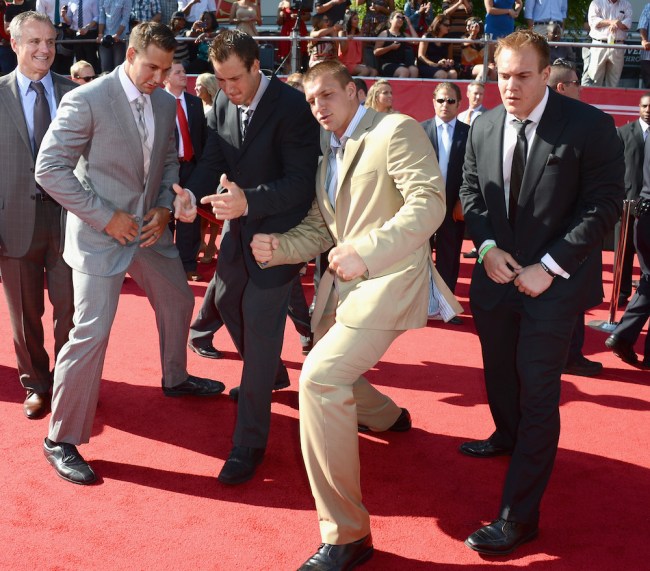 Rob Gronkowski is one of five (very massive and former football-playing) sons of Gordy Gronkowski, who, along with his wife Diane, raised the boys in upstate New York. While Gronk’s dad was a former D-1 athlete himself, and the family had a long lineage of athletes — the boys’ great-grandpa participated in the 1924 Olympics, and set five world records in the sport — until Rob reached the NFL and had success, most people probably didn’t know much about the family.

That all changed with the whole Gronk attitude, which, essentially, is acting like the biggest meathead on the planet. That’s not a knock on the Buccaneers’ tight end, his brothers, or the way his parents raised their boys, but plainly a matter of fact, considering the entire Gronkowski clan pretty much embodied a WWE-style of living.

Now, I couldn’t imagine growing up with four brothers like Rob Gronkowski did. The absolute madness in that household had to be at a level that my little pea brain couldn’t possibly comprehend. Add in the fact that each was hoping to be the alpha male, were all jacked, and were all hoping for the attention of their parents, and, well, things had to have resembled a zoo. In fact, according to Gronk’s dad, Gordy, that’s exactly what it was like raising his five boys.

Journalist Chris Jones, who spoke with Gordy Gronkowski in 2014 for Esquire, took to Twitter during Super Bowl 55 to recall some of his conversation with the leader of the Gronk family. From Rob and his brothers downing 20 gallons of milk each week, to the family just throwing five king-sized beds into two massive rooms for the boys to pick to sleep in each night, this was far from your typical household. Just take a look below at the thread Jones shared on Super Sunday.

I profiled Gronk's dad, Gordy, and went to their house. The five Gronk boys shared five king-sized beds in two massive rooms with extra-wide doors. Which bed was Rob's? Gordy shrugged: "Wherever they crashed that night, they crashed." It was like he raised giant cats.

Gordy Gronkowski reckoned his boys, at their consumptive peak, went through 20 gallons of milk a week.

In the Gronk backyard, there is a regulation baseball diamond, 325 feet down the lines. Tennis court. Pool. When the last boy moved out, Gordy replaced the old hot tub. "That hot tub could have told some stories," he said. He looked like a man who had survived war.

Gordy Gronkowski worked his ass off, owns a bunch of stores that sold fitness equipment. Raised five insane boys. Coached them all. Spent, like, $600 a week just on groceries. I asked him what it was like. He looked at me and said: "Total hell."

I have no idea what's happening here—never underestimate the appeal of Random Gronk Facts, I guess—but if you want to read the whole story, it's here. I'm not at Esquire anymore, but we got to do some good, fun work. Gordy was a blast.https://t.co/hCjJDFNdFN

The fact that Jones described Rob Gronkowski’s dad as a man who “looked like a man who had survived war,” after telling stories about raising his five sons is enough to understand what it was like growing up in that household. Sure, Rob gets the most attention because he’s now a four-time Super Bowl champ and (presumptive) Hall of Famer when he hangs it up for good, but his four brothers have also accomplished a hell of a lot, too — like becoming entrepreneurs and being active in the community.

Having siblings is fun, but having four other brothers who all ate like they were participating in a weightlifting competition every single day had to be… a lot. As Gordy Gronkowski described it in 2014, it sure as hell was.