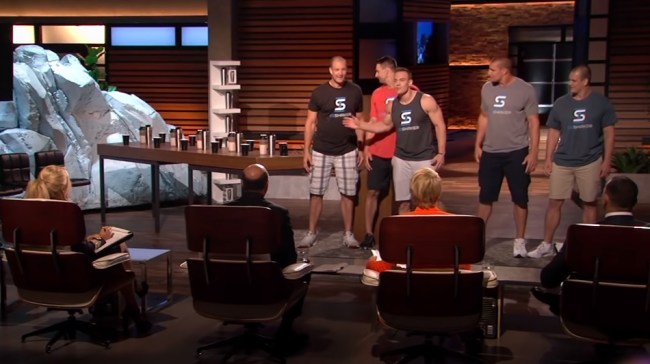 Chris Gronkowski is a retired NFL player just like his brother Rob Gronkowski. While we’re not sure what Gronk’s retirement will look like (Possibly a game show and dog-walking), we know that Chris Gronkowski’s post-football career includes his Ice Shaker company that was a hit on Shark Tank.

Chris left football in 2013 and then in 2017 he founded Ice Shaker, a company that makes kitchen-grade stainless steel insulated shaker bottles. In October of 2017, Chris pitched his company on Shark Tank with the help of his five brothers that have played professional sports. Rob, Chris, Glenn, and Dan played in the NFL, while Gordon played Major League Baseball.

On set with my bro @chrisgronkowski today for @sixstarpronutrition ! We been getting amped all hours…Good vibes only! Keep shaking your @iceshakerbottle bro!

RELATED: Rob Gronkowski Sells Boston Penthouse For A Profit A Week After Retiring From The NFL

During their presentation, the Gronk boys challenged the Sharks to play flip cup against them because of course they did. Allegedly, there was only water in their cups. The Gronkowski’s defeated the Sharks in the party game. Chris asked the Sharks for $100,000 for 10 percent stake in Ice Shaker. In the end, Alex Rodriguez and Mark Cuban teamed up to provide $150,000 in exchange for 15% equity.

Now the Chris, ARod and Cubes are enjoying the massive success of Ice Shaker. During the company’s first six months in business, Ice Shaker sold $80,000 worth of product. In the year following their Shark Tank appearance, Ice Shaker has boasted over $3 million in sales. Following Rob Gronkowski’s retirement, maybe Gronk will have some spare time to help his brother’s successful business.

“We sold out on Amazon within 20 minutes,” Gronkowski said of his product the day the Shark Tank episode aired. “I wish we’d had more in stock there, but at the time we didn’t. It’s been life-changing really.”

Ice Shaker has even evolved its brand from broadening their approach from only selling stainless steel insulated water bottles made for mixing protein for your gym workout to offering wine tumblers aimed at women.

When asked why he didn’t go with the name recognition of the Gronkowski family, Chris responded by saying, “Naming a product after a person could really hurt the business and limit the demographics. I took this advice and made a custom edition bottle instead and was able to capture the market of customers looking for the Gronk name on the bottle.”

RELATED: Mark Cuban Reveals The One Business He Would Start If He Were Going To Start A Business Today

Chris revealed that being an entrepreneur isn’t all fun and flip cup games “It requires long hours for little pay, but if you have the passion and drive, [then] you will be successful,” he told CNBC.

When asked for some advice to potential entrepreneurs appearing on Shark Tank, Gronkowski said, “The biggest lesson that I learned was that you can never be too prepared. Go over your pitch again and again and make sure you have all your facts memorized. If you know your information, you will be able to pitch your company with confidence.”

RELATED: ‘Shark Tank’ Pitch By Kids Of Hero 9/11 Firefighter Who Died Of Cancer Leaves Not One Dry Eye In The Room