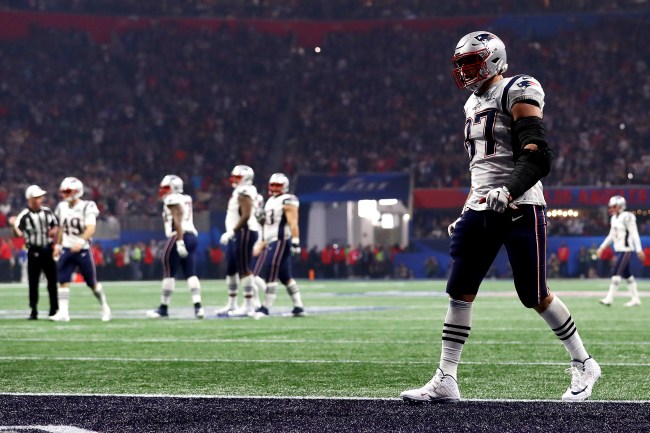 Rob Gronkowski was tight-lipped about the injuries he suffered during his nine year career because Bill Belichick would cut off his pinky finger like a Handmaid if he leaked any information out-of-house.

Now that Gronk is retired (for now?) and backing a CBDMedic, a cannabidiol-based pain relief company that aims to infiltrate the NFL, the Patriots legend is being candid with the symptoms he struggled with that were brought on by nearly a decade of hard-nosed professional football.

During an interview with NBC News on Wednesday, Gronk detailed a particularly gruesome symptom brought on by a pair of known concussions during his career that caused liquid to congregate in his skull.

“No lie, I felt my head, I used to have liquid,” Gronkowski said. “It used to be thick, like, my head used to be thicker, like a centimeter of liquid in some spots, and you feel it. I’d be like, ‘What the heck?’ You could put indents in my head, but now, finally, I’m getting the right treatments and doing the right things.”

Gronk was then asked about Aaron Hernandez and how his former teammate suffered the worst CTE ever recorded after his brain was tested following a suicide in prison.

“I’m aware of that. That’s why I took the action and got away from the game,” Gronk said. “I would not lie, I was walking around, my mood swings were totally up and down. I was aware of what was going with my body and my mind and that’s why I had to walk away.”

As far as what Gronk is doing now to heal his brain and keep it sharp:

“I’m doing exercises, I’m doing the right treatment,” Gronk said. “I’m looking for brain exercises. For example, when I’m home at my house, I have a 750-piece puzzle. I get treatment on my head.”

Gronk on Andrew Luck’s decision to retire, his own battles with injuries, CTE and more…@RobGronkowski sat down with @phillipmenaNBC pic.twitter.com/ENjrfSXjBA

These revelations come in the wake of the three-time Super Bowl champion getting emotional about how football took a toll on him to the point where it was zapping the joy out of life.

"I want to be clear to my fans … I was not in a good place. Football was bringing me down."

–Rob Gronkowski on his decision to retire pic.twitter.com/zEek2QNPjH

At this point, Gronk doesn’t sound like a man who’s eager to return to the field.