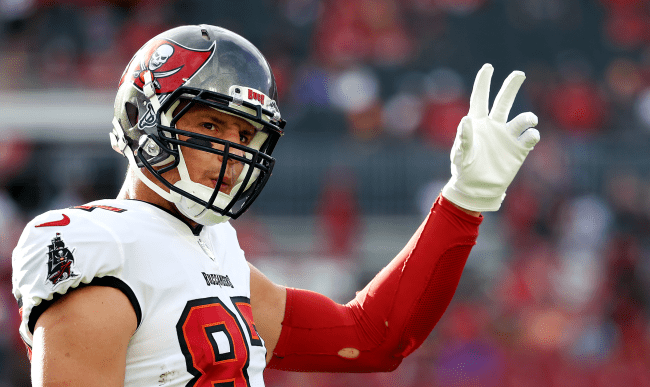 As fans learned later, despite his coach wanting to take him out of the game, Tom Brady refused to exit until he made sure Rob Gronkowski reached his big money incentive.

Now we find out that Tom Brady had a little help in remembering what was at stake for his buddy Gronk as he was reminded by the tight end on the sidelines at one point during the game.

“Let’s go, I need one more!” Gronk shouted at Brady.

In another clip, Rob Gronkowski is seen talking to one of the Buccaneers’ staff on the sideline about trying to achieve his bonus.

“If I don’t get the seventh catch, I have to go get a real job,” Gronkowski informed him.

The video then switches to Gronk getting his needed catch, and the jumps to him shouting at Brady on the sidelines.

“Thanks, baby. I had to get you,” Brady said back.

And finally, we see Gronk letting offensive tackle Donovan Smith know that he “got a milli” which led to a little singing and dancing.

Gronkowski ended up using some of the million dollar bonus to take care of his teammates because they’re all expecting “a little handout.”

Well, everyone but Tom Brady, the guy who helped him get the million bucks.

Brady was fine with that though, saying on Monday’s Let’s Go podcast, “That’s okay. I know what he eats. Let’s just say it’s not along the guidelines of TB12 so he can have his dinner without me.”