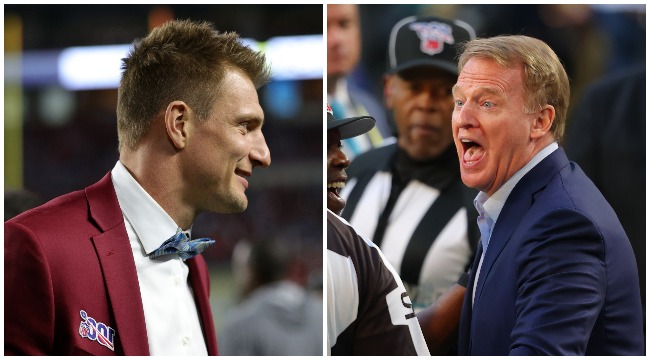 The NFL without Rob Gronkowski is like being at a party after the keg runs dry and all we’re left with is CBD ointment and Travis Kelce hitting on my wife. No soy fiesta.

The void Gronk left in his wake will never go away, and all we can hope for now is to find a way to live with the grief. That’s why the biggest story every week is how much the refs suck at their jobs and how much weed Troy Aikman smoked in the booth. We were even captivated for two months by a senior citizen getting a rub-and-tug in a strip mall. Distraction is sometimes the best pain relief. Distraction and getting tugged off.

Mr. Gronkowski appeared on the Pardon My Take podcast in a cruel effort to remind us how much the world still needs him.

Gronk told a tale about inadvertently pranking Roger Goodell when the Commissioner called to congratulate him for being named to the NFL’s 100 All-Time Team. The story is funnier when you consider Goodell hates the Patriots and was probably in between league meetings about how to organically leak nudes of Belichick’s girlfriend.

ALL time story from Gronk today about getting the call from The NFL about making the #NFL100 pic.twitter.com/M7RHzPMfKv

So then it calls back again, and I’m like, ‘Aw, I’ll answer it, whatever. I’m gonna mess around. Let me mess around with this phone call.’

So I answer it and I’m like, [high-pitch] ‘Hellooooooo? Hellooooooooo? Who is this?’

And I was like [high-pitch] ‘Hellooooooo? Helloooooo?’ And I’m just thinking like, man, this is why I don’t answer. People are pranking me. People prank me.

‘Rob. This is Roger Goodell. I’m looking for Rob Gronkowski.’

‘Is Rob Gronkowski there?’

So then like two days later, the phone call, it comes back again. And I’m sitting there like yeah, no way. I’m not answering. That’s definitely not him. Like he would have left me a message on the other two phone calls I didn’t answer.

So later that day then, he calls again – I mean, the number calls again. And then this time they leave a voicemail, and I was like, OK, finally they leave a voicemail. And I listened to the voicemail and it ends up being Roger Goodell again. ‘Hey Rob, it’s Roger Goodell. Just looking for you. I’m not sure if this is the right number or not.’ That’s what he says. ‘And I just wanted to congratulate you, man, you have made the top 100 players of all time.’

And I’m just sitting there like man, I’m not sure. But when I did hang up the first time, I was thinking in my head like, it kind of sounded like him. But that was classic. But I go, if it was him, he’ll find a way to contact me another way.

To make this story shorter, it ended up being him.

I called the office back that he told me to call. I called him back and talked to him, and he didn’t bring up anything about that phone call. But when I see him, I can’t wait to bring it up. I’m gonna be like, ‘Yo, who did you think that was going, ‘Helllloooooooo? Who is this?’

Hilarious story, but I seem to remember it differently. 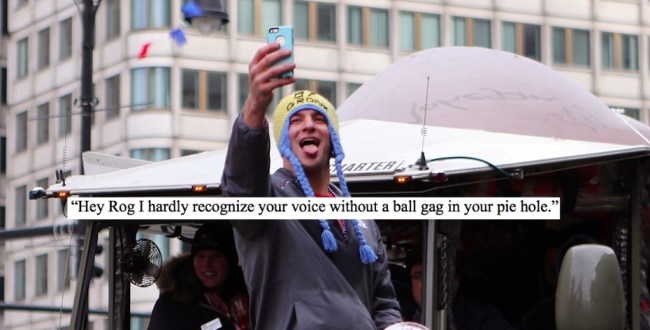 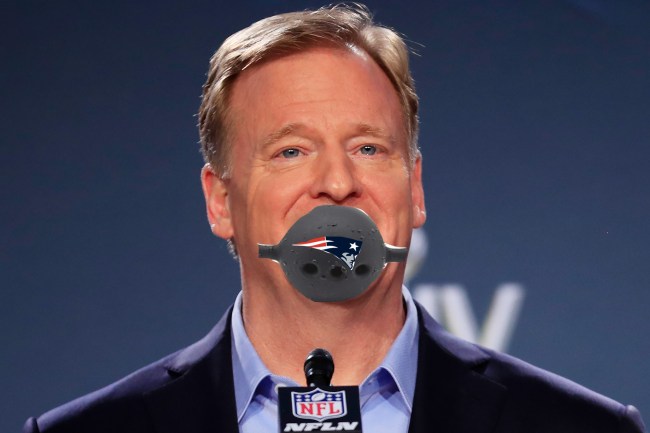 Whatever makes it tickle I guess, Rog.