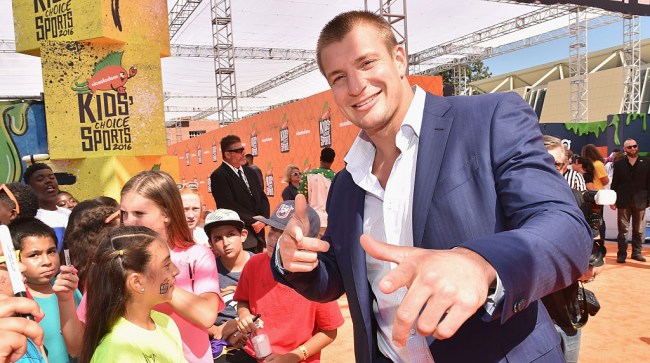 In the aftermath of the New England Patriots’ Super Bowl LII loss, their star tight end Rob Gronkowski made it sound a whole lot like he was thinking about retiring from football.

“I’m definitely gonna look at my future, for sure. I’ll sit down in the next couple of weeks and see where I’m at,” Gronkowski told reporters on Sunday.

Now a new report out of New England by Bill Burt of the Eagle-Tribune says Gronkowski is thinking about pursuing an acting career full-time.

Gronkowski, nicknamed “Gronk,” has been told by two Hollywood superstars Dwayne “The Rock” Johnson and Sylvester Stallone, that he could make millions of dollars in action films.

Gronkowski has told friends that the injuries have taken a toll on him.

So has the fact that his contract, which was “sweetened” last year, but is still team-friendly.

28-year-old Gronk, while “only” making $10.75 million this past season, has stated in his book, It’s Good to be Gronk!, that he hasn’t spent a cent of his football salary, and showed throughout the offseason in 2017 that he has MANY interests outside of football.

From being a pit road reporter at the Daytona 500 to hopping in the ring at WrestleMania and getting involved again later on WWE Smackdown Live, to NUMEROUS personal appearances, there is no shortage of demand for his services off the gridiron.

Gronk has also been the host of a TV show on Nickelodeon, Crashletes, and a standup special on Showtime, appeared in a music video, shot a promotional video for Tide, and starred in a movie that came out last March called You Can’t Have It.

Throw in the fact that his family, including his brothers, run a successful fitness business and it would be very easy to see Gronkowski walk away now, rather than subject his brain and body to more damage. After all, he wouldn’t be the first well-known player to quit football for a career in Hollywood.