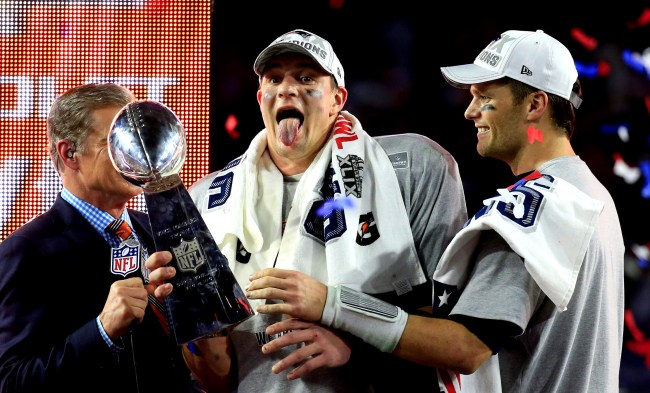 During the Patriots’ bye week, quarterback Tom Brady savagely trolled the team’s fanbase on Twitter, getting their hopes up that Rob Gronkowski was making a return to play tight end for New England.

Gronkowski, who still hasn’t filed his retirement papers with the NFL and only recently turned 30-years-old, has had several people around him suggest over the past several months that he was not completely done playing football.

Six months ago his girlfriend Camille Kostek said, “I think he is messing with everybody, then again he stumps me all the time so who knows? He could be pulling this out of the woodwork at some time. I would love to see him out there, but I am also respecting him taking this time for himself, healing up his body, and enjoying the time off.”

Prior to that, Gronk’s agent Drew Rosenhaus suggested that his client could end up coming back to the NFL.

Even Gronk himself has stated that he’d only need a month to train if he’d ever decide to come out of retirement.

And now, the rumor mill has been fired up yet again as a new report by NFL.com’s Ian Rapoport has reminded everyone that Patriots owner Robert Kraft told Gronkowski that he wants him to return in November and December for a playoff run.

Time is running out for Gronk to make a return. According to the rules, the last day for Gronkowski and the team to agree to grant him an official return to the roster would be Saturday, Nov. 30 — the day before the team’s Week 13 game.

Because he’s on the reserve/retired list, if he doesn’t come off it by then, he’s not eligible to play. Gronkowski has not turned in his retirement papers yet, but that is often considered a formality and is not required to remain retired.

So will it happen or will the “Gronk is coming back” rumors finally die when November 30th comes and goes and there’s no announcement?

“When I retired, I retired for a reason. It would be a no. There it is. But I never say no, because I said no and everyone said ‘he’s kidding.’ It’s a no. In my mind, that’s how it is, a no. I say I keep it open, because when I do say no people say I’m kidding. But in my mind, it’s a no,” Gronk told WEEI in mid-October.

“Like I said, I would have to be feeling it,” Gronk added. “It needs to be a couple of weeks where I need to go play football again. … I’m enjoying myself right now. I don’t have that itch, and if I had that itch I’d go back. It would have to be a continuous itch. I see Tom throw a nice touchdown pass, I’m like ‘I wish that was me’. But that’s five seconds.”