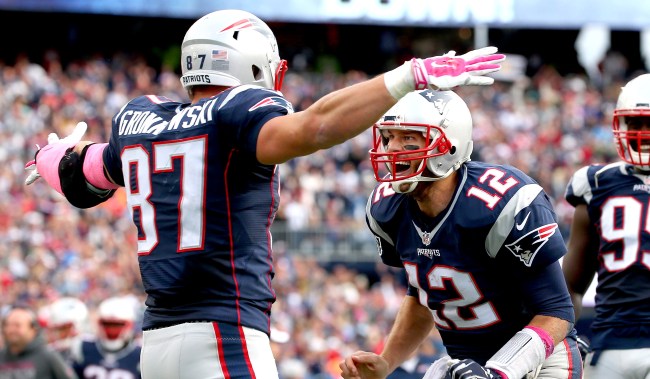 New England Patriots quarterback Tom Brady is low-key a very evil person. Actually, I take that back. He isn’t even all that low-key about it. Just ask these women and children.

So it’s really not much a surprise to see TB12 toying with his fanbase’s emotions on Thursday by trolling a bunch of Patriots fans into believing that he was hyping up the return of his now retired star tight end Rob Gronkowski.

On Thursday, Gronk’s brother Chris posted a photo of himself and Rob announcing a new partnership between their company and Brady’s TB12 brand.

12+87 = 99 problems but an @iceshakerbottle ain’t one 🔥🔥
.
.
Pumped to have partnered up with @TB12sports to bring two GOATs together. 🐐 🐐
.
Check out https://t.co/QCcPvNF7em to snag one today before they are gone ✅🔥.
.#tb12 #iceshaker #LimitedEdition pic.twitter.com/jmI4IACNYZ

Brady, as he often does, saw a golden opportunity and grabbed it, commented, “Reunited and it feels so good!”

Reunited and it feels so good! https://t.co/rcy0mPYa4M

Unfortunately, or fortunately, depending on your stance regarding the New England Patriots and their fans, this is all that many people saw…

And that was all it took to send some Patriots fans into full meltdown thinking that all the talk of Gronk returning for a playoff run had come true.

Tom Brady and Gronk are definitely reuniting this season 🙌

We’ve all been waiting for it, don’t play with us like that @TomBrady #LetsGoGronk

This is not funny Tom

Unless you're reuniting on the field please don't mess with us like this Tom https://t.co/94xMxjz6hs

Don’t play with my feelings like this Tom and Rob

If these folks had just read the entire thread this is what they would have seen.