Robert Kraft Speaks About Tom Brady Leaving The Patriots After 20 Years: ‘I Gave Him His Freedom’ 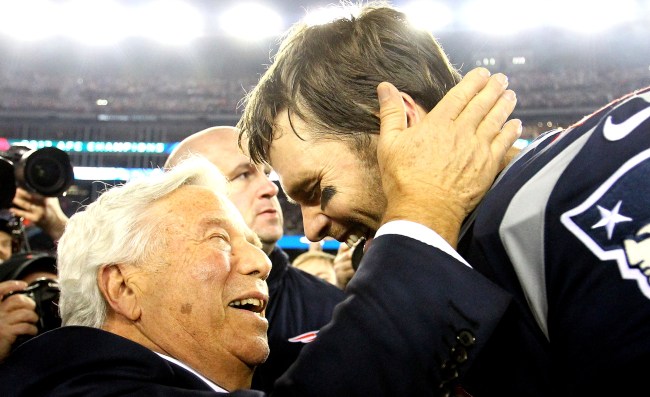 The sports world was rocked once again on Tuesday as six-time Super Bowl champion Tom Brady announced that after 20 incredibly successful seasons he would no longer be playing quarterback for the New England Patriots.

But before that, on Monday night, he told Patriots owner Robert Kraft he was leaving.

“Tommy initiated contact and came over and saw me last night and told me he was going to move on,” Kraft told PFT. “And it was really a positive, loving moment. I love him like a son. That’s why I gave his the freedom. I figured after 20 years, anybody who has brought us six Super Bowls, if he wants to be free, he has the right to do that. I had hoped he would choose to stay, as a fan and an owner. But out of respect for the relationship we’ve built, I gave him his freedom.”

Kraft also added that Brady leaving New England “makes me very sad” and that he will still be rooting for TB12, most of the time.

“Except when he plays us,” Kraft said, “I wish him well.”

Tom Curran of NBCSportsBoston.com reports that no other announcements are expected to be made by Brady on Tuesday, but he too spoke with Kraft, who told him, “This is not the way I wanted it to end, but in life, people need to be free to realize what’s important to them. I respect him so much. It was a sad, loving discussion.”

When asked about why Brady was leaving the only team he’s ever played for, Kraft told Curran, “This is big picture. I just don’t think he was going to be happy staying in our system at this point.”

Now, with that decision made, the focus turns to where exactly will Tom Brady be playing quarterback during the 2020 NFL season?

According to Ian Rappaport, with the Titans, Raiders, and 49ers now apparently out of the mix, it really leaves just two teams: the Los Angeles Chargers and the Tampa Bay Buccaneers, who are reportedly going “all in” on signing Brady.

Meanwhile, in New England, Patriots fans are concerning themselves for the first time in over 20 years with who exactly will be playing quarterback for their team going forward.

Jameis Winston is still on the market, as is Teddy Bridgewater, but the Bears are reportedly the favorites to land him, but rumors says it will end up being Andy Dalton.

Do the Patriots go get Teddy Bridgewater or Jameis Winston or get Andy Dalton? Always heard Belichick likes Dalton.

Text from an NFL coach yesterday: "Dalton has to be the Patriots' guy?" The fit makes sense if Bill Belichick wants a veteran to — and this still sounds weird — replace Tom Brady at quarterback. https://t.co/R5LvbyyjnC

Scary times in New England, for more reason than one.