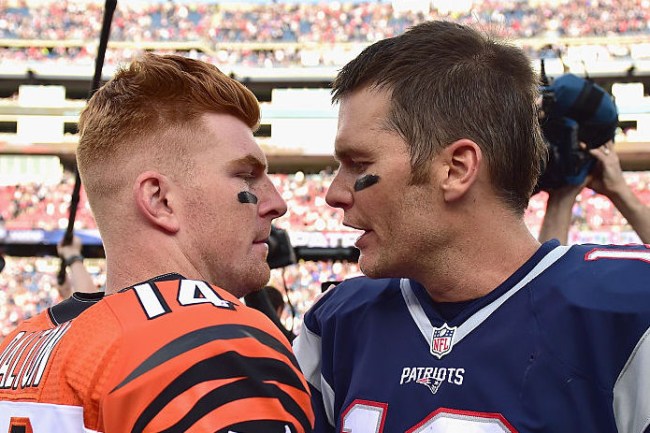 At this point, there have been so many rumors and unsubstantiated reports concerning where Tom Brady will be playing next year that it’s almost impossible to make sense of it all, and as a result, I’d like to attempt to sum up the current situation with some songs.

The Patriots legend—who reportedly feels like he’s underpaid despite repeatedly taking hometown discounts to help out New England—is in search of a monster contract that will likely be the final one of his storied career and there’s no more obvious choice to sum up his current mindset than The Clash’s 1982 classic “Should I Stay or Should I Go.”

Meanwhile, Patriots fans are overanalyzing Brady’s cryptic social media posts and keeping close tabs on who he’s FaceTiming as they wait with bated breath and I’m honestly surprised no one has pulled a John Cusack in Say Anything and posted up outside of his house while blaring “Quit Playing Games (with My Heart)” by the Backstreet Boys from a boombox.

Meanwhile, Andy Dalton’s future is also up in the air after he was benched by the Bengals halfway through last season, and with Cincinnati all but guaranteed to pick up Joe Burrow with the first pick in the draft, I can only imagine he feels kind of like Kim Jong-il did in Team America.

Over the past couple of months, a seemingly endless number of names have been floated as potential replacements if Brady decides to take his talents elsewhere, and in January, Peter King suggested Bill Belichick had his eyes on Dalton as part of his contingency plan.

Now, Ian Rapoport has added some more fuel to the fire with a new report, saying the Bengals are currently working with their former franchise quarterback to find him a new home and that the Patriots are a potential landing spot (in addition to the Bears and the Colts).

From our Combine coverage: A look at the Andy Dalton trade market, as the #Bengals work with his agent Jeff Nalley to find a trade partner later in March. Dalton will have options. pic.twitter.com/8TYPwdBUnZ

Regardless of where Dalton ends up, you have to assume anyone who trades for him will be at the receiving end of a very favorable transaction, as the Bengals have essentially zero leverage in this situation.

While he’s had his fair share of troubles, Dalton is only 32 years old, and though it’s doubtful he’ll have the same longevity as Brady, it’d be very interesting to see how he’d play under the guidance of Belichick.

We still have a couple of weeks until free agency officially starts and I’m sure the constant stream of endless speculation will turn into white water rapids as it gets closer so it’ll be interesting to see which so-called experts will be able to blast some Ace of Base while taking a victory lap if their predictions end up panning out.