Who Will Replace Tom Brady As Pats QB? Peter King Gives Interesting Reason Why Bill Belichick May Have Eyes On Andy Dalton 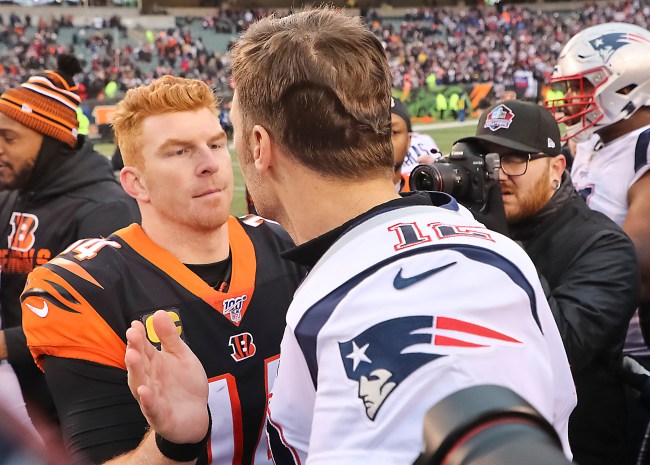 Who will replace Tom Brady as quarterback of the New England Patriots? This might have sounded like an absolutely delusional question just a few years ago — as the GOAT captured his third league MVP award in 2017 — but, fast-forward to 2020, and there’s some debate whether or not head coach Bill Belichick wants the future Hall of Fame to return to the only franchise he’s ever known next season.

For months, Brady’s future has been talked about. Whether it’s a trade to the Los Angeles Chargers, or a belief that the Miami Dolphins may be pursuing him, or, even stranger, that the Cleveland Browns may land the signal-caller, nobody really knows what might come next for the 42-year-old. However, that won’t stop people from at least trying to guess, right?

While nobody knows who will replace Tom Brady as quarterback of the Pats — or if that’s even going to happen — longtime NFL writer Peter King at least has a hunch. While talking on NBC Sports, King outlines a situation where Bill Belichick may already have his eyes on Andy Dalton, a decent quarterback who has proven to have above average ability. Here’s how King sees it.

“I have no idea who Bill Belichick sits in his office, feet up on the desk watching tape of who he says, ‘I really like that guy,’ whether or not the rest of the league likes him,” King said on NBC Sports. “One of the guys I think — and I know people are going to laugh at this — I think Bill Belichick would really like to work with Andy Dalton because Andy Dalton is a football player, you know? He’s not Tom Brady. He’s not gonna go down in the pantheon, I get it. Guys who are gonna do down in the pantheon at age 32 are not available, OK? Russell Wilson’s not available. I think Andy Dalton would be a very compelling guy to either be their quarterback for a while or to be their bridge guy to the next quarterback or to take Jarrett Stidham under his wing as Brady did some this year and make the best of Jarrett Stidham for 2021 and beyond.”

It’s easy to laugh at the suggestion from Peter King here since the Bengals were a pathetic 2-14 and have the first overall pick in the upcoming 2020 NFL Draft, but the suggestion could hold some merit. Other than the Bengals benching Andy Dalton — on his birthday, no less — the former TCU product has seen success in the NFL. Now 32 years old, he’s gone to three Pro Bowls, and previously led Cincy to the playoffs in four-straight season from 2011-14. Dalton may no longer be that guy, but he’s better than some other options out there if Bill Belichick decides to move on from Brady.

So who will replace Tom Brady if the Pats move on from the six-time Super Bowl champ? It’s a tricky question to answer, but, if it does happen, Peter King brings up a solid reason as to why Andy Dalton could be the guy in New England to at least keep the franchise competitive for the foreseeable future. And while Pats owner Robert Kraft obviously wants Brady back, we’ll just have to wait and see how all this drama unfolds during the next few months.