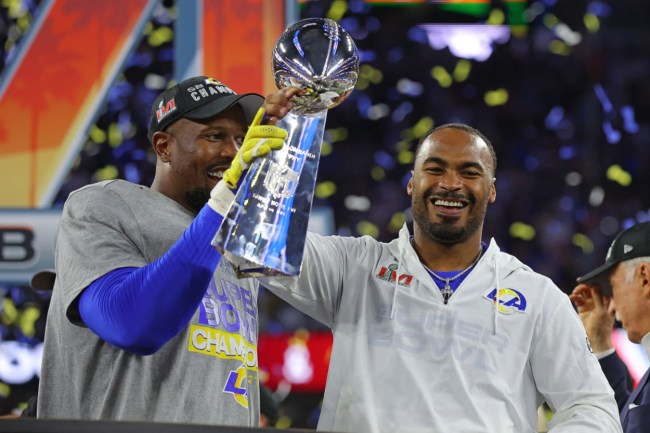 Among the 70,000-plus people inside SoFi Stadium for the Super Bowl on Sunday, Robert Woods was the one person who could relate most to Odell Beckham Jr. when he went down with his knee injury. So, it makes sense that he consoled the star wideout during halftime when OBJ was delivered the news that he wouldn’t be able to return to the game with what was later determined to be a torn ACL.

Woods tore an ACL of his own earlier in the season, the same day Beckham Jr. actually arrived in Los Angeles actually, so he was quick to make his way over to OBJ in the locker room.

Speaking with NFL Network on Tuesday, Ian Rapaport shared the story about Woods consoling OBJ in the locker room, sharing some tears with the wide receiver, and playing a big role in convincing him to return to the sideline and eventually watch his Rams hoist the Lombardi Trophy.

From NFL Now: #Rams WR Odell Beckham Jr is expected to have surgery to repair his ACL in the coming days, but before all this… the compassion of Robert Woods in the halftime locker room led to a special moment. pic.twitter.com/FG92QjhgQQ

Some folks out there may hear this story and claim the biggest takeaway was the fact that it sounds like OBJ contemplated just sitting in the locker room for the remainder of the game. You can be critical of that decision if you want, but let’s not forget the man just suffered his second ACL tear in less than two years in the Super Bowl. He also got off to a very hot start in the game before going down with the non-contact blow.

Props to Woods for talking things over with his teammate in the locker room, and props to Rapaport for sharing the story.