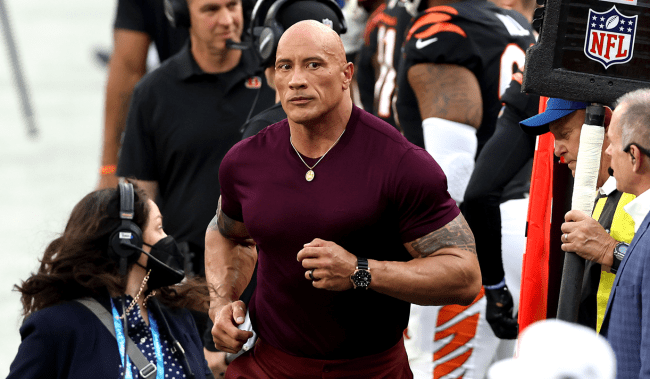 As he promised Tuesday night, Dwayne Johnson revealed something new about the XFL on Wednesday: a brand spanking new logo for the league.

“TOMORROW we reveal the beginning of our @XFL2023’s new vision, direction & CULTURE,” The Rock tweeted on Tuesday. “The new X intersection of dreams x opportunities. For players, fans – all of us. I’m ready. I know you are too. Let’s play some football.”

Accompanying his tweet was a visual of the old XFL logo getting the Thanos snap treatment.

TOMORROW we reveal the beginning of our @XFL2023’s new vision, direction & CULTURE.

For players, fans – all of us.

I’m ready.
I know you are too.
Let’s play some football.

On Wednesday, Johnson hit social media again, this time with the promised new XFL logo for the 2023 season.

In the video revealing the logo, the voices of The Rock and his partner Dany Garcia are heard saying, “Football is fueled by dreams. To go further, to get there faster. Those wins don’t just happen, they must be claimed. Work for today, achieved together.

“The XFL is where the full potential of football is realized, both on and off the field. Give cities new reasons to cheer, partners new platforms to build on, people a deeper sense of fandom. And athletes a new path to live their passion and play professional football. This is tomorrow’s league, driven by a new purpose and a shared commitment.

“Powered by new leadership, this is for all of us. And the only way to get there is together. To change how football is experienced. Where passion meets a field of possibility. Tomorrow’s league starts today. Welcome to the XFL.”

Pumped to reveal our new @XFL2023 logo as we build our organization and shape our one of a kind, hungry XFL culture.
X represents the INTERSECTION OF DREAMS & OPPORTUNITY.
To all our XFL players, coaches, fans;
You bring the dreams – we’ll bring the opportunity.
Now LFG!#XFL2023 pic.twitter.com/ucbSjiBVwf

Technically, if we’re splitting hairs, “tomorrow’s league” is the USFL, which is scheduled to begin playing games on April 16th… assuming they don’t sued into oblivion. Who knows when the XFL will actually play a game… again.

Football fans, for the most part, appeared to be rather bored by the big XFL reveal.

I can't believe that I waited for this. WTF??? THIS SUCK. They are going to lose a lot of fans if they keep doing this.

Eh, not as fun and eye catching as the former logo. This one just looks like something you'd see on the can of an energy drink at a gas station

Dude the logo is lazy and the new merch is extremely lazy. I bought so much merch in 2020 for the Xfl none of the new stuff looks worth it

What the actual f***? We sat and waited watching the countdown on the site for a video with a new logo? What about the teams? Cities? Any real information that isn't a logo change.

No cities, no teams, no merch, no news. Just a new logo and a little video. We're needing something to actually sink our teeth into.

Yet another non-announcement. Almost 2 years of ownership, what in the world is going on here.

keep the 2020 logo and teams, i have a jersey damnit!!! pic.twitter.com/aWzGFqpnAY

A 1min video and no city or team announcements…lame. Truly disappointed.