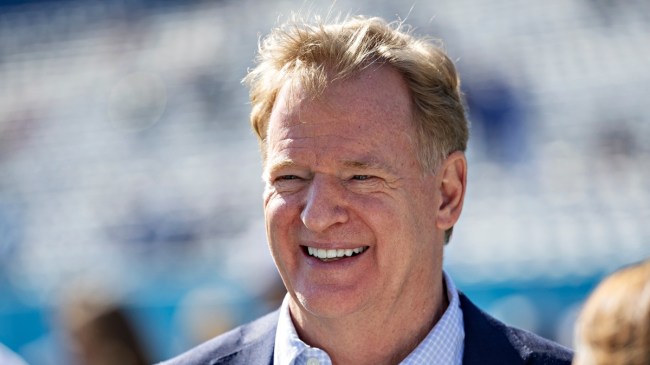 The New York Giants made some noise on Sunday after upsetting the Minnesota Vikings on Wildcard Weekend. However, it appears Roger Goodell stole the show.

Well after the game concluded, it appears the NFL commissioner did something we’d never expect him to see.

Babzz shares a video of a fan yelling expletives at Goodell (it’s fun to hate on the commissioner but this fan was rather obnoxious). Suddenly, Roger Goodell turns to the fan and makes some hilarious mocking motions we never thought we’d see from him. Check it out for yourself.

Rodger Goodell gets a ton of hate and I get it. But HOLY SHIT I respect him for his response. He absolutely dunked on the Viking fan screaming at him. Fat W here for Goodell. pic.twitter.com/XIsrGEGcK2

Okay, so the NFL commissioner finally earns some cool points for this one, right? Especially considering this came out of nowhere. Normally Roger Goodell would have just kept walking forward but he must have been in a good mood after the Giants upset the Vikings or something.

On top of that, the fan yelling at him definitely deserved to be mocked. It’s fun to boo Roger Goodell whenever we get the chance, but to yell expletives like that is too much. So that fan got what he deserved in our book.

Some don’t like the gestures Goodell made as they don’t find it “classy.” Oh well. We just hope this leads to a more loose version of Roger Goodell.