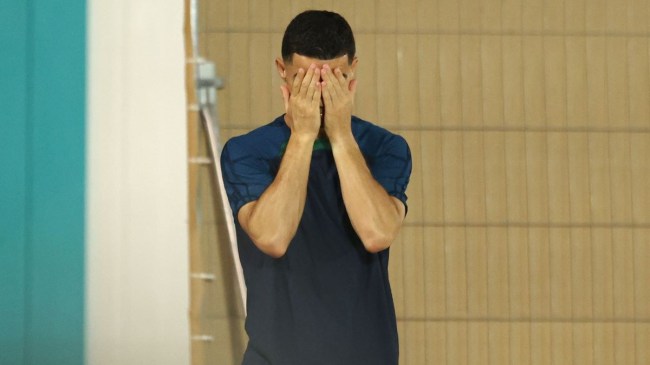 Soccer megastar Cristiano Ronaldo is no stranger to controversy. When he’s not scoring goals or stealing valor, Ronaldo has spent most of his recent free time tearing down the club that helped make, Manchester United.

Just prior to the start of the 2022 FIFA World Cup in Qatar, Ronaldo gave a tell-all interview to Piers Morgan. In the interview, he ripped to shreds everyone at the famed Premier League club, from the players to the owners. This infuriated the club’s leadership.

Ultimately, it led to the club severing ties with the Portuguese superstar altogether. Manchester United has also looked into pursing a lawsuit against Ronaldo.

While he’s far from the player he once was, Ronaldo’s name brand alone means that he’ll have plenty of interested suitors. Including one in the Middle East that reportedly wants to offer him an astronomically large contract.

But before that gets sorted out, the superstar has business to attend to in Qatar. Portugal faces Switzerland on Tuesday in the round of 16 in the FIFA World Cup. But Ronaldo may well be left on the bench after angering manager Fernando Santos.

Ronaldo was subbed off in the 65th minute of Portugal’s 2-1 loss to South Korea in their final Group H match last Friday. While Portugal still won the group, it was clear that the forward wasn’t happy with being removed from the match.

Cameras appeared to catch the 37-year-old saying “he’s in a rush to sub me” as he left the field.

Media members asked Santos about the incident ahead of the round of 16 match with the Swiss. And his answer was very telling.

“Have I already watched the footage? Yes. I didn’t like it. Didn’t like it at all,” he said. “From there, it’s things you sort out internally. It was sorted out this way, and now we think about the game tomorrow. Everyone is focused on the game.”

Santos then refused to answer whether Ronaldo would start the next match. If he does not, the Portuguese aren’t short on options. AC Milan star Rafael Leao, who has been linked to a big-money move to Chelsea, came off the bench in each of the last two games. Leao scored the match-winning goal in the 3-2 win over Ghana and is considered one of the world’s brightest young stars.

As for Ronaldo, he’s quickly running out of the bridges to burn.