Ronda Rousey Almost Submits To The ‘Hot Ones’ Challenge: ‘My Tears Are Burning My Face’ 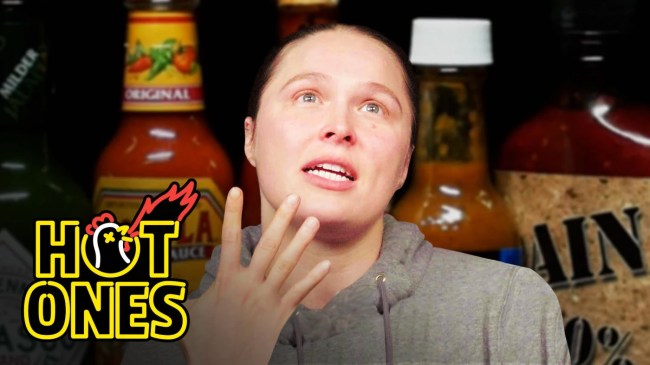 Love her or hate her, Ronda Rousey is never, ever boring. The former UFC and WWE champion is almost always a great guest, like she was on Kevin Hart’s Cold As Balls show and made the comedian whimper.

And while she may be one of the toughest women on the planet, Rousey was still no match for First We Feast’s “Hot Ones” challenge.

Hot sauce doesn’t care if you’re a Olympic judo champion, a UFC Hall of Famer, or the second longest WWE Raw Women’s Champion, it will kick your ass and then laugh in your face while you suffer.

All in all though she actually did way better than a lot of other guest on “Hot Ones.” (Looking at you, Margot Robbie and Pete Davidson.)

Maybe it’s because wings have always been a part of Rousey’s post-fight celebratory feast because the folks over at First We Feast said Ronda “hands down, has the most efficient and effective wing-eating technique that we have ever seen on ‘Hot Ones.'”

She also, in between her efficient wing-eating, talked about her love of Dragon Ball Z, the perfect arm bar technique, her days of working at Home Depot, and the appeal of World of Warcraft.

It’s really quite the episode. Fair warning though: Ronda uses a whole lot of very colorful language throughout.