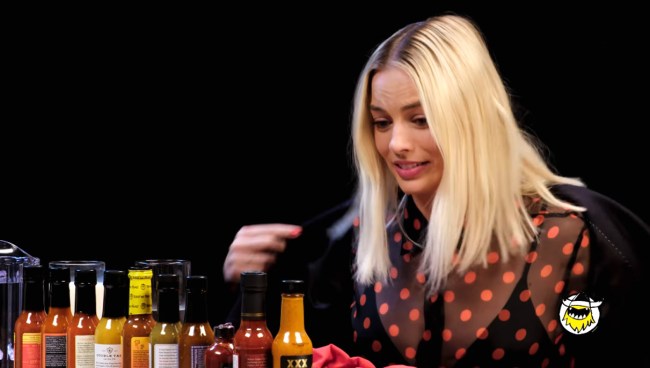 Have I mentioned how amazing it must be to have First We Feast host Sean Evans’ job? I mean, c’mon! He gets to sit and eat wings with people like Halle Berry, Scarlett Johansson, Shia LaBeouf, Bill Burr, and now Margot Robbie?!

The best part is that he’s so used to eating these hot sauces and the celebrities are not, so like Birds of Prey star Margot Robbie does in this episode, they suffer… a lot… and he just sits there enjoying it.

Robbie actually might have had the worst reaction of any celebrity we’ver seen so far on the show. It only took one or two wings before she started figuratively begging for mercy. By the fifth wing she was REALLY having a hard time maintaining. 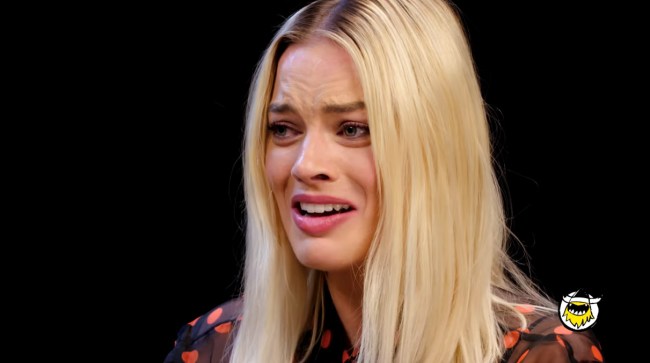 Not that Robbie is averse to eating. She admitted to Evans that she once won an eating competition by eating four pounds of spaghetti Bolognese.

She also revealed a secret tip to pickpocketing she learned when she was prepping for the film Focus with Will Smith.

“If you can touch someone in a particular place, it’s like having a spotlight,” Robbie explained. “You can make someone’s brain only see what you’re shining a spotlight on.”

That was all before, as she approached the end – and the spiciest hot sauces – told Evans, “Oh my fucking god. I think I might die. It’s so spicy. Holy shit.”

For the final wing, Robbie got to share some of her suffering with Birds of Prey co-stars Mary Elizabeth Winstead, Ella Jay Basco, and Jurnee Smollet-Bell as they partook in the infamous Last Dab.