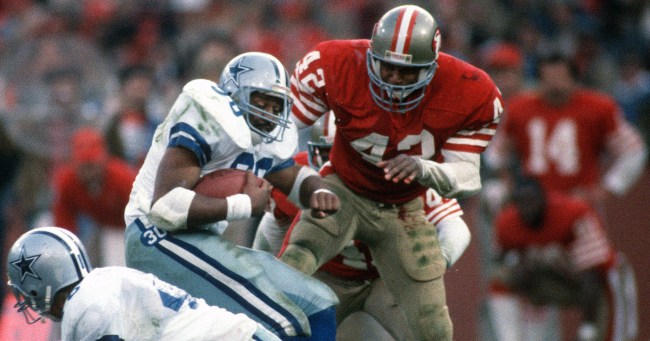 Arguably the most legendary story in the history of the NFL is the one about the time hard hitting 49ers safety Ronnie Lott had the tip of his left pinky finger amputated after the 1985 season when it was crushed while tackling Dallas Cowboys running back Timmy Newsome rather than getting it fixed and having to miss the start of the 1986 season.

It’s now been almost 35 years since Lott made that decision yet it still came up as a topic of conversation recently when Hall of Famers Lott, Charles Haley, and Marcus Allen got together for a Zoom call to support the charity All-Stars Helping Kids.

It all began, reports The Athletic, when Allen asked Haley, “Charles, I know we wouldn’t do this because you and I are much too vain, but would you cut your finger off? Is it brave or nuts? Or crazy? Which one is it?”

“I’m thinkin’ dumb! (laughter all around) But you know what? That’s what he wanted everybody to know, man,” replied Haley. “That took him from being a regular man to a legend. He’s not a man no more, he’s a legend. A living legend.”

“Charles, you’re absolutely right,” added Allen. “Right that moment — that’s where heroes are born and legends never die. Ronnie Lott cuts his finger off. And what did you do Ronnie? Did you leave it? Did you bring it home with you?”

That’s when Lott talked in a more serious tone, paying tribute to the late Larry Wilson, the Hall of Fame free safety who died earlier this month at age 82. Wilson once intercepted a pass wearing casts on both hands due to broken wrists.

“You think about greatness and you hear these stories and you realize that, ‘Man. He could do it,’’’ Lott said. “And what’s really interesting to me is we’re always testing the mettle of who we are. We all make sacrifices. … And the great ones, no matter what sport it is, want to go out and make something happen no matter how bad they feel.”

Of course, Haley being Haley, he then asked Lott, “Hey, Ronnie, if you can find that little nub you cut off, I’ll barbecue it and eat it!”

Allen also wondered what happened to the finger.

“Did you bring it home?” he asked. “Is it in a safe place or something? The safety-deposit box? Come on! It’d be worth a lot of money now, Ronnie!”

“I crack up because there are moments when kids come over for Halloween,” Lott replied. “We would sit there and say, ‘Hey, it’s in the jar!’ We’d have fun with it, but, you know, all the men that have fought for this country have made way bigger sacrifices. … It’s all-in for those guys, man. Every day, they give up way more than we ever think about giving up.”

At another point during the conversation, the GOAT Jerry Rice called Lott and ended up getting dragged into the roundtable of greatness.

Lott then recalled “one of the great moments” while he, Rice and Haley were all on the 49ers.

“Chuck, you know, we used to go at it, man,’’ Rice said. “You used to beat people in the gravel pit, ‘cause if you had a disagreement with somebody, you’d be calling ‘em out and saying, ‘Let’s leave it in the gravel pit,’ or something like that.

At that point in the fight, Rice reached for a fire extinguisher to bash Haley with and free himself.

The NFL greats also covered numerous other topics like NFL wildman Lyle Alzado, Haley hugging Michael Jackson, and the time Jim Brown told Lott and Allen to “get off my grass!”

Check it all out over at The Athletic.