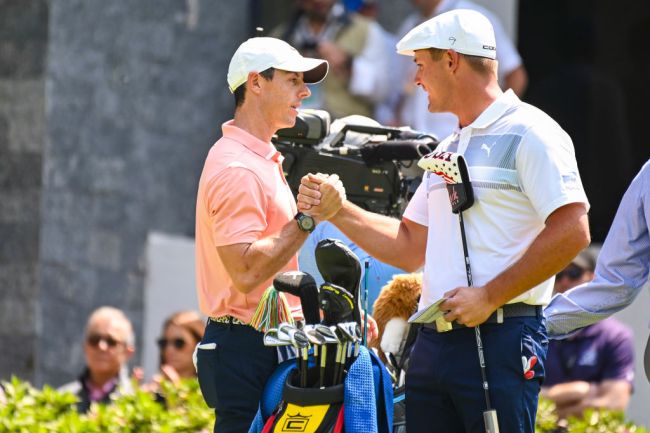 Bryson DeChambeau has dominated golf headlines for a large chunk of the year and it’s no different this week ahead of the season finale Tour Championship.

DeChambeau snapped at a fan for calling him ‘Brooksie’ following his playoff loss to Patrick Cantlay at the BMW Championship this past Sunday. Fast-forward to Tuesday and PGA Tour commissioner Jay Monahan has seemingly had enough of fans chirping DeChambeau as he announced that fans who call DeChambeau ‘Brooksie’ could be thrown out of the tournament. All the PGA Tour did by threatening fans is make things worse for everyone involved, but especially DeChambeau.

Nevertheless, the DeChambeau ‘Brooksie’ chatter is all anyone is talking about, which you can’t blame anybody for.

Rory McIlroy, the king of press conferences on the PGA Tour, was asked about the current DeChambeau situation and whether or not he felt any sympathy toward him. To no surprise, McIlroy offered up a brilliant and honest answer about everything going on at the moment. While McIlroy did explain that some of this is self-inflicted by DeChambeau, he can’t help but feel some sympathy for him.

“I certainly feel some sympathy for him because I certainly, I don’t think that you should be ostracized or criticized for being different, and I think we have all known from the start that Bryson is different and he is not going to conform to the way people want him to be,” McIlroy began. “He is his own person. He thinks his own thoughts and everyone has a right to do that.”

“There are certainly things that he has done in the past that have brought some of this stuff on himself. I’m not saying that he’s completely blameless in this. But at the same time, I think he has been getting a pretty rough go of it of late and it’s actually pretty sad to see because he, deep down, I think, is a nice person and all he wants to do is try to be the best golfer he can be. And it just seems like every week something else happens and I would say it’s pretty tough to be Bryson DeChambeau right now.”

You can read McIlroy’s full comments in the tweet below.

Rory was asked if he had any sympathy toward Bryson with everything going on right now. To no surprise at all, his answer was brilliant. pic.twitter.com/o07suWcr09