Rory McIlroy On Justin Thomas’ Use Of Homophobic Slur: ‘You’re Not Allowed To Make A Mistake Anymore’ 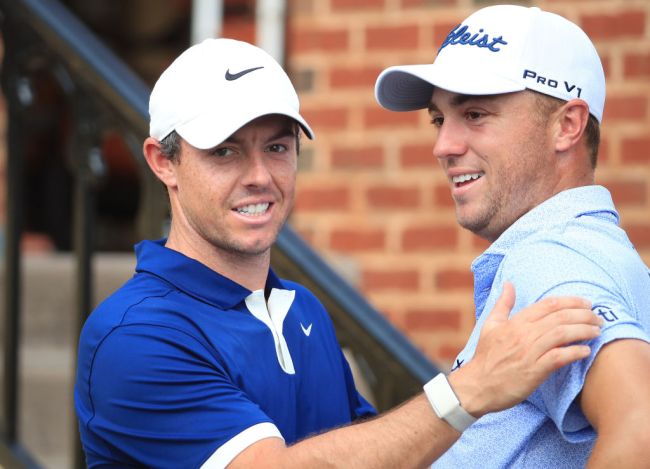 Justin Thomas has received a fair amount of criticism following his use of a homophobic slur that was caught on a hot mic during the Sentry Tournament of Champions. Thomas immediately apologized for his remark, but a week following the incident Ralph Lauren announced that it was discontinuing its sponsorship with the No. 3 golfer in the world.

Some think that Thomas hasn’t received harsh enough criticism while others believe that the entire reaction to the situation has been a bit extra. Rory McIlroy, who is a friend of Thomas’, gave his thoughts on the situation and while he didn’t condone the word, he believes Thomas has responded well and completely owned up to his mistake.

“I think he’s responded really, really well. I think he realized he made a big mistake as soon as it was brought to him last week in Hawaii, and he completely owned up to it,” McIlroy told the media at the Abu Dhabi Golf Championship. “He said he messed up; he’s going to try to be better. And you know, Justin is true to his word. He will be.”

McIlroy also made it a point that in this day and age it seems like you can’t make a mistake anymore. Or when you do inevitably make a mistake, it’s tough to come back from as the media and everyone jumps on it. Call it cancel culture if you want, McIlroy is very well in-tune with the media and it’s clear he’s seen a shift where it’s become almost impossible to learn from a mistake due to the overwhelming criticism.

“Obviously it doesn’t make what he said any better, but you know, I think in this day and age, it’s hard because it seems like you can’t – you’re not allowed to make a mistake anymore. Any mistake gets jumped on. Look, he made a mistake; he owned up to it, and he’ll be better because of it.”

You can’t help but tip your cap to McIlroy for being honest and transparent about a situation like this. He didn’t have to give these sort of in-depth thoughts about JT and the situation, but he did anyway.

McIlroy handled the question extremely well. He supported a friend of his that’s going through some tough things. McIlroy didn’t condone Thomas’ actions at all, said he completely messed up, and also took a shot at the state of the cancel culture and media out there that is more focused on hurting someone and making the situation worse instead of allowing for an opportunity to learn something after a mistake.